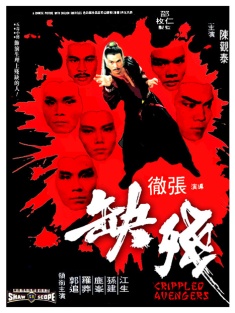 In trying to decipher a title for a movie like Crippled Avengers, one can’t help but to think of it in literal terms. I still managed to end up a little surprised though when I discovered that the film was indeed a low budget Hong Kong kung-fu movie literally about crippled men avenging their honor. Even with the film being released with more striking names in North America like Mortal Combat (not with a “k”) and Return of the Five Deadly Venoms, the most blunt sounding title stuck and it’s the title you will find the film under on Netflix and Wikipedia.

The movie’s story is honestly pretty straightforward and familiar. Four men are wronged by an evil ruler and only after training under the tutelage of a wise kung fu master can the men defeat this evil ruler and his henchmen. I suppose really the only twist we’re given to this story is with the premise. You could probably make a drinking game out of how many times people are crippled or say the word “crippled” in this movie. A kung fu master’s son is crippled by having his arms graphically chopped off by a gang after the master, so afterwards the son is outfitted with iron fists and he and his father take revenge on the gang by killing them and crippling their sons. However, their drive for revenge turns into a metaphorical iron fist of power over the local village, and anyone that defies them is punished by being violently crippled.

You may think that I’m being too descriptive or over-explaining the plot of the movie, but all of this happens before we even find out who our protagonists are and what their goal is. The movie opens with the gang entering the compound of the kung fu master (named Chu Twin). Then, after they chop off the arms of the son, the movie follows Chu Twin and his son as they train and prepare to exact revenge on the gang. They remain the focus even as they turn into what could best be described as evil warlords, until they cripple the four men that unite together to try to stop Chu Twin, and then this becomes the focus for the rest of the film. The first act still has plenty of gloriously cheap looking and sounding action beats, but it’s hard to really get invested in them if you don’t know what’s going on. 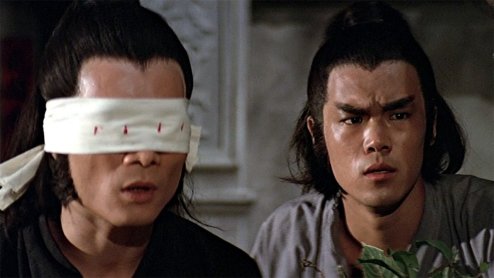 Saying this does bring up a fair point about Crippled Avengers. Obviously, if you’re a fan of this kind of film, the old low budget kung fu films with over the top camerawork, cheesy dialogue, and ridiculously violent actions sequences, then this will be a movie you’ll more than likely enjoy. Newcomers might not get some of the slightly self-referential dialogue, but I could definitely see myself recommending this to someone who’s ready to get into some schlock movies.

A decently enjoyable entry in the low budget kung-fu genre.