A Monster Calls (2016) Review – The Spectacle of Grief 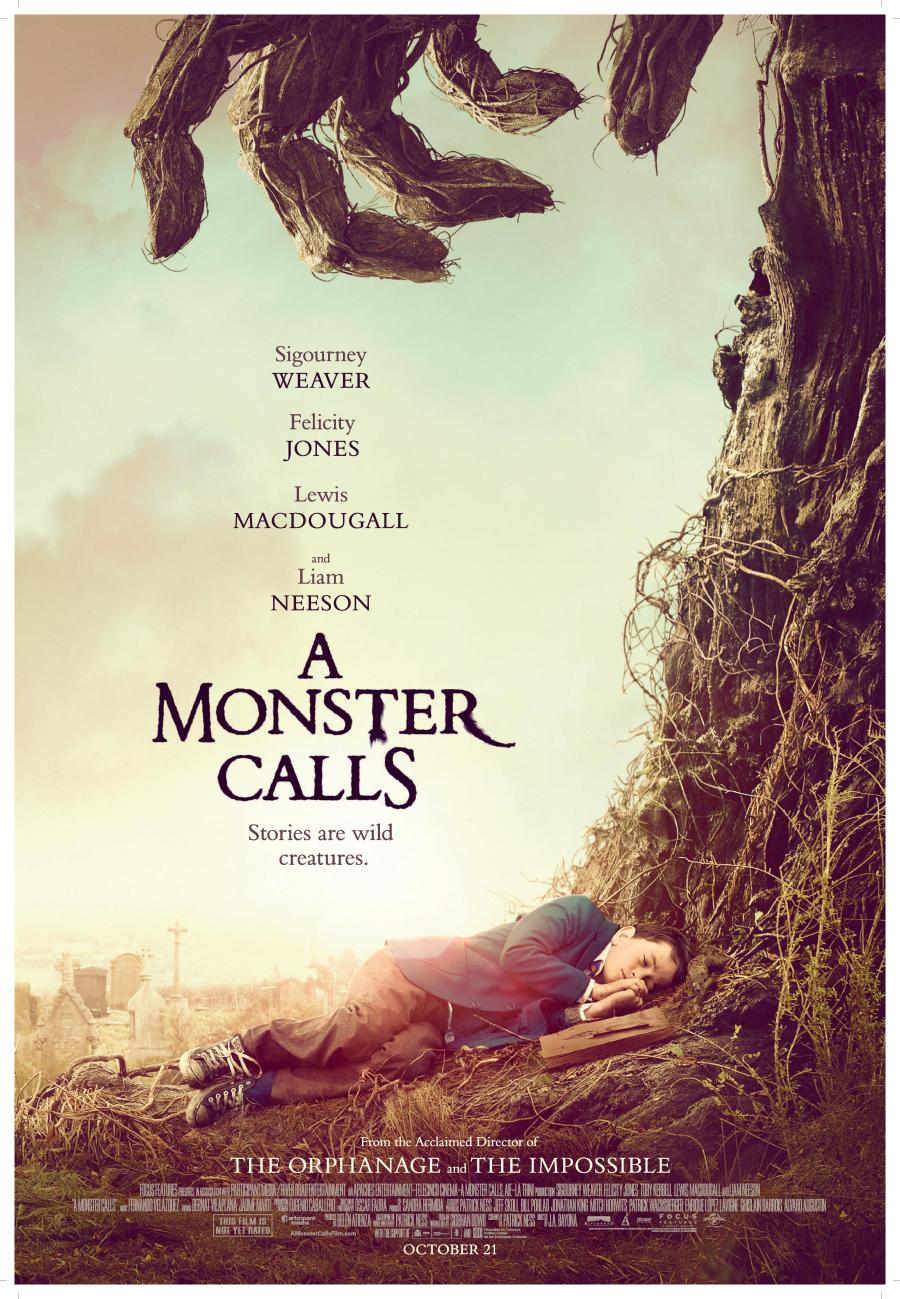 Film has thus far assured us that the complexity of grief does not fit neatly into a structured narrative. Even films that address loss merely within the context of crumbling relationships and disaffected domestics, such as Eternal Sunshine Of The Spotless Mind (2004) and A Woman Under The Influence (1974), approach the topic of grief with a cautious sense of reverence. Films about grief move as delicately as the newly converted tiptoeing into Church for the first time. A Monster Calls (2016) is no exception. Based upon a novel of the same name by Patrick Ness, who also pens the screenplay, the film attempts to sluice some truth out of the ineffable trauma of watching a loved one die. The closest thing to a thesis Ness and Director J.A. Bayona offer is a miserable paradox: simultaneously both hoping the dying could stay and wishing they would go, if only to spare the living the pain. Whether or not you prescribe to this same belief is, ultimately, irrelevant. Sadly the substance of his film is wrapped up in two lovely scenes near the end, and the rest of the overstuffed run-time is mostly an excuse for rapturous visuals and poetic rambling.

The novel, published in 2011, is based entirely on a story by Siobhan Dowd, a celebrated Irish activist and author. Dowd completed four novels in her lifetime and was midway through conceptualizing her fifth, A Monster Calls, when she died of breast cancer in 2007. The final novel, about a young boy coping with the terminal illness of his mother, was completed by Patrick Ness at Dowd’s request. Of Dowd and the novel, Ness said, “She had the characters, a premise, and a beginning. What she didn’t have, unfortunately, was time.”

The spectre of its creator’s untimely death looms large over the film adaptation of A Monster Calls. Lizzie Clayton (Felicity Jones), in some of her last moments with her son Conor (Lewis MacDougall), laments, “I wish I had a hundred years. A hundred years I could give to you.” It’s poignant moments like these, when Clayton musters up the strength to impart mortal nuggets of wisdom upon her son, that A Monster Calls finds its surest footing. But these grief sessions cannot occupy every frame of the film. In fact, they often come across as too punishing; tear-jerkers for the sake of tear-jerking. The entire final third of the movie is a relentless, almost aggressively sad rumination on the soul-shattering effect of cancer on a family. With the exception of two beautiful scenes – one when Clayton delivers the aforementioned line, two when Conor flips through his mother’s childhood sketchbook for the first time – the last forty minutes of the film seem to justify the cumbersome opening by stocking up on enough misery to last you until next Oscar season.

A Monster Calls is a children’s film in the same way that euthanizing a dog is a family outing – no child should have to experience this level of suffering, but it might be prudent for some children to witness it, if only to better understand the inexplicable nuances of grief. It wouldn’t be an over-simplification to say the premise of A Monster Calls is, “Recognition of your own suffering leads to an acceptance of loss,” but to its credit, the film carefully emphasizes how difficult and brave it is to come to such a selfish and thankless conclusion, particularly for a child.

That said, there is little in A Monster Calls that feels simplified for a younger audience. The film is loaded with hefty themes and obscure motifs, all delivered by some beautifully disturbing imagery. The titular Monster, a towering Ent-like creature voiced by Liam Neeson, alternates between benign countenance and absolutely horrifying grotesquerie, splitting his fingers into grasping, gnarled branches and sending smoldering veins of ember flowing through his limbs. The eerie score lulls with twinkly keys and explodes with thunderous timpanis, and the cold-gray English countryside could have sprung straight from Poe’s oeuvre. But perhaps the most eerily affecting element is the protagonist, Conor O’Malley.

You might recognize Lewis MacDougall if you were unfortunate enough to see Pan (2015), but hopefully this will be your first time seeing him on screen. MacDougall delivers a nearly irreproachable performance. His marble, cross-shaped face hangs with the weight of twice his years, and his glassy alien eyes tug sharply at the lens. MacDougall is easily the type of actor that could be mishandled by style-over-substance types, but for all his other faults during this film, Director J.A. Bayona displays him beautifully. Conor is most often shown under high-keys with neatly-kept butterfly lighting, accentuating the depth of his eyes and highlighting the vampiric cut of his cheeks. Throughout the film, you can see Conor struggling to tame the rage and fear growing inside him. In every scene in which he appears (all of them except for some fantastical animation sequences in the Second Act), you can see the emotions boiling under his concave jawline, as he chews through each line of dialogue with frightening maturity. The film opens with Conor experiencing a panic attack during the middle of a night terror. When we exited the theater my sister, who suffers from severe panic attacks, turned to me and said, “That’s exactly how it feels.”

Conor looks as sickly as his mother in his most vulnerable moments. To that end, some of the more disturbing shots of Felicity Jones as Conor’s terminally-ill mother Lizzy could be classified as body-horror. Speaking as one who has seen relatives battle cancer, the film is tasteful and faithful in demonstrating the devastation done to the body during chemotherapy. Felicity Jones proves yet again why she’s an Oscar contender, although she’s given mercifully little screen-time in which to suffer for the sake of the story.

A Monster Calls is a Spanish co-production shot by Oscar Faura, perhaps most famous for The Imitation Game (2014). Faura and Bayona worked together before on The Impossible (2012), perhaps tied with Aloha (2015) for the worst example of white-washing in recent years. Yet other than MacDougall’s performance, the major selling point of his film is undoubtedly Faura’s work. The recurring motif of watercolors, spilling out in seemingly random tributaries, is a fitting metaphor for the gentle ebb and flow of Faura’s shooting style. The Art Direction only compounds this effect, providing spatial significance through an intense detail to set design. When The Monster (Neeson) suddenly appears to Conor, often during moments and in spaces that do not comfortably house him, we see the impact of space on his giant form as he crouches and twists to orient himself in close quarters. Similarly, when we are thrust outside to the open air, the use of wide lenses and symmetrical framing contracts the space into easily accessible tableaux. Interpret as you will the subjugation of a Monster, representative of everything from Death to Storytelling (see the tagline: ‘Stories Are Wild Creatures‘), by physical structures in the real world. I will confess that, of all the movies released this past season, A Monster Calls does the most with image to buoy an otherwise sparse narrative.

But therein lies the major flaw with Bayona’s film; there simply isn’t enough to warrant a feature-length effort. It’s painfully obvious in almost every scene how the narrative meanders and re-treads old ground. Even the rough outline of the ‘A’ Plot – The Monster visiting Conor night after night to tell him three stories – speaks to the folktale-type pacing, which might work for a low fantasy novel but doesn’t do as well when transposed to the screen. The ostensible point of all The Monster’s stories – that there is no good and no evil and that in the face of life’s injustice we have only Truth as defense – is meant to ease Conor’s pain as he struggles with the realization that he wants his Mom to die, if only so that she might not suffer any longer. But this exercise in moral ambiguity is repeated time and time again, as any classroom lesson might be, in a way that feels tiresome after the 1st telling.

There’s the heart of a fine film here, woven by all the threads that so often make them; beautiful cinematography, a meaningful premise, and exemplary performances to drive them along. The fantastical elements of the story are refreshing and deftly handled. Conor’s fantasy is never spoiled by needless exposition or justification – The Monster is just there. “This is when I come walking,” he says, and that truly is all the explanation needed for his presence. But consider A Monster Calls a prime example of archipelago-filmmaking. The islands are all lush and populated, but the sea that binds them is cold, harsh, and unyielding.

Perhaps Bayona bit off more than he could chew with the source material, or perhaps Ness’ novel simply doesn’t translate well to the big screen. Or perhaps the spectacle of grief is left feeling listless after such aggressive insistence. It’s hard to say. A Monster Calls is saved by a career-making performance from MacDougall, wonderful cinematography and creature effects, and a genuinely poignant story. But the real trouble here is that the film underneath all that, no matter which way you slice it, needs saving in the first place.