Please Shut Up About Twin Peaks

The problem with creating an unimpeachable legacy is not the risk of deposition, but the inevitability of infatuation.

As I sit ensconced by the glow of my computer screen, I read glassy-eyed the turgid word-count of every modern media journalist’s grad-school fantasy; a review of the Season 3 premiere of Twin Peaks.

I think this is my fifth review. I can’t be sure. They’re all the same.

Most of these rotund bespectacled white men were waking up to nocturnal emissions when Twin Peaks first aired on ABC in 1990. These are 30- and 40-somethings who can justifiably use the word nostalgic to describe the return of Twin Peaks. I, on the other hand, was born five years after Agent Cooper first captivated 35 million cable-TV viewers across the nation, so naturally I possess the inalienable right to judge. It seems every carpal-tunneled methamphet with a Communications degree from a prestigious private university and a desk job at some hoity-toity East Coast magazine has mustered the wherewithal to be the beat-all end-all authority on David Lynch. Their ability to wax didactic about David Lynch’s return cannot be infringed upon, or so says their cushy six-figure salary from Condè Nast.

The two best articles about the return of Twin Peaks were published in Vulture two days before the Season 3 premiere last Sunday, and in Esquire on the Monday after. Both of these articles are good because you can just read their headlines and then tab back to NSFW_gifs or whatever window you close out of when you hear your boss’s footsteps. Nevertheless these authors at least manage, accidentally or not, to illuminate better the insurmountable obstacle David Lynch faces in bringing Twin Peaks back to the small-screen in 2017.

Twin Peaks thrived three decades ago as a water-cooler show. Every twist and turn and macabre revelation was impossible to preconceive. Speculation was limited to post-episode roundtables with your close friends and morning quarterbacking sessions over cups of piping-hot black coffee. Analysis was restricted to laymans’ circles, save for brief exposures to magazine fluff-pieces and café film-journals. Without an unfettered online content-cornucopia spewing out Lynch articles like a function machine from middle school – (A:New Twin Peaks!) → (B:My parents spent too much money on education but at least Salon hired me twenty years after they died of cancer!) → C:David Lynch Keeps His Head was my favorite essay in grad-school and this show is going to shove a butt-plug up my ass! – Twin Peaks was able to achieve a kind of slow-burn cult fame. But there is no slow-burn in the age of the internet. There is only the rotund bespectacled journalist, his (and it most definitely is usually his) preconceptions, a lenient editor, and the grease-hewn wheels of the hype-train. 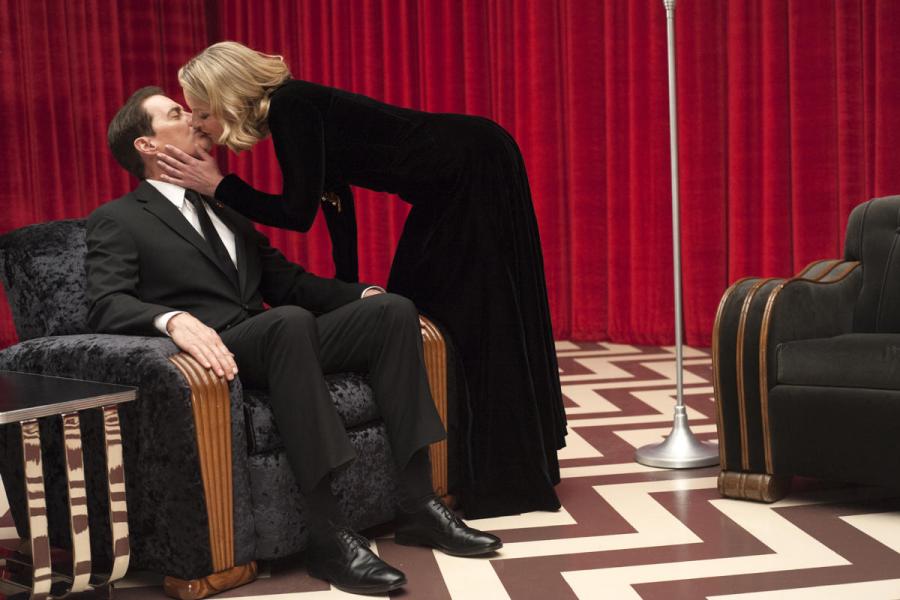 Neither Matt Zoller Seitz or Corey Atad are wrong about their opinions of David Lynch, or of David Lynch’s seminal surrealist soap opera Twin Peaks. Both astutely address how Twin Peaks was a surefire case of aligning stars. At the time, no film directors as prolific and controversial as David Lynch had ever branched so completely off into television, and none had done so with as large a budget and complete a control as was offered to Lynch by ABC. Couple that with the steady-guiding hand of TV-veteran Mark Frost, and Twin Peaks was guaranteed to be something, at least, hitherto unseen.

Of course, it ended up being more than an anomalous blip in the wave of burgeoning TV dominance. Twin Peaks completely trounced and replaced the bar for serialized storytelling. It introduced uninitiated viewers to a narcotic elixir of small-town drama, somnambulistic nightmares, surrealist netherworlds, and interdimensional travel. After a year of unprecedented success, a freewheeling second season and increasing disaffection from Lynch laid Twin Peaks to an early rest. Even so, the beguiling yet spectacular finale and the characteristically Lynchian prequel film Fire Walk With Me (1992) cemented the series as cult phenomena. Twin Peaks is your favorite TV show’s favorite TV show. For more than twenty years, it seemed it would stay that way – there was no indication the paradox of Lynch’s bucolic hellscape would ever return in any form, outside of several audiobooks and oft-rumoured deleted scenes from the film. Twin Peaks crashed with the sound and the fury, and like all of our greatest apocrypha, seemed to vanish just as quickly into the whispering dark of the woods.

But, as with most things Lynchian, serendipity and coincidence has brought it back to life. From one offhand line spoken at the end of the final episode, arguably wholly inconsequential until Lynch and Co. realized three years ago what it might mean: “I’ll see you again in 25 years,” comes Twin Peaks: The Return. 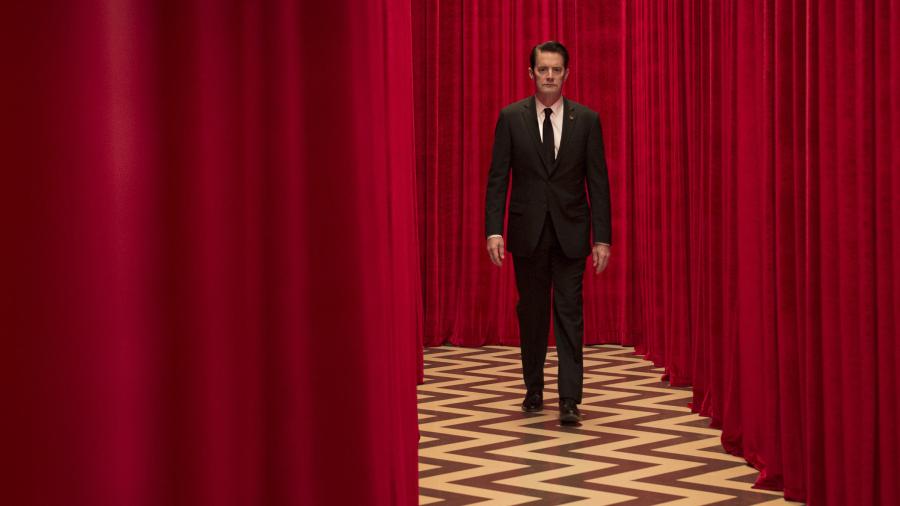 The problem with creating an unimpeachable legacy is not the risk of deposition, but the inevitability of infatuation. When Lynch and Frost confirmed two years ago that Twin Peaks would indeed be returning to Showtime, the Krakatoan tumult of a thousand nerds cracking their collective fingers above their keyboards settled into a low din of nonstop coverage.

Whether from external pressure or internal impulse, film and television critics have made it their manifest destiny to contextualize Twin Peaks. The irony of a show enshrined in pop culture because of a lack of context is seemingly lost on your average film/TV pundit. In an unbelievably ignorant move, these writers have put the proverbial cart before the pale horse and assumed viewers cannot possibly endure the return of Twin Peaks without hearing from some mouthpiece what it means for the world. Context and Coverage. Coverage and Context. It’s hard to tell the difference between two breeds of garbage.

Of course Twin Peaks never existed in a vacuum. It was as much a knee-jerk reaction to Cold War turmoil for Lynch as it was a reckoning with his own misanthropic experience growing up in small town America. “The evil that men do,” as Dr. Hayward (the late Warren Frost) says in the show’s second season. Such a transcendental premise cannot function without context. Moreover, Twin Peaks: The Return faces the daunting challenge of premiering into a world populated by its disciples. This new season will inevitably be held against the standard of such shows as Breaking Bad, Lost, Fargo, The Sopranos and Disney Channel’s Gravity Falls – shows that have been more than vocal about the influence the original Twin Peaks had on their conception.

But Lynch distinguishes himself from less surreal directors in that he does not care whether or not you are aware of the peripheral circumstances of his world. He gives no thought to metalogue or theory. He lives in the realm of his creation for its duration, and couldn’t give two shits whether or not you do the same. In imposing upon the return of Twin Peaks an obligation, whether to appease or not, meet expectations or not, journalists have proliferated those same expectations. They have greeted this milestone in TV history not with open eyes and thrill-starved hearts, but with the cold paucity of rationale and discourse. These are the kids in art school you wished you could break a bottle over.

Writing about expecting the unexpected in the return of Twin Peaks is the same as writing about what to expect. Seitz and Atad negate the wisdom of their headlines by writing any copy at all, damning themselves to the very same pitfall they sought to warn against. Twin Peaks is of course up for review, same as any other show. It may be a particularly great show but this does not exempt it from the usual channels of critique. Yet every review of Twin Peaks: The Return I’ve read today has eschewed a conventional review in favor of some sanctimonious soliloquy about the cultural weight of Twin Peaks. It appears the enigma of Lynch’s masterpiece is doomed to be slain by the very culture of television obsessives it created. Were it almost any other auteur, I’d say the coffin is shut. But this is Lynch. He will, unfailingly, find a way to keep the mystery alive.

No one can ruin Twin Peaks for you. It’s a show that rejects the threat of ‘spoilers’ with inexplicable imagery and incomprehensible plotlines. I have seen the first two episodes of the new season. They are good. Watch them. Talk about them with your friends. Debate them with your coworkers. Consider them in your showers. But if you have read this far, or read at all, it means you express enough of an interest in this show to care about the impact it might have on you – as a viewer, as a fan, as a creature of narrative. Perhaps you are me, converted to Lynch’s doctrine in the darkened basement of your best friend’s house cir. 2012, watching Eraserhead (1977) with rapture. Perhaps you’ve grown tired of your friends’ incessant chattering about this show and want to watch if only to shut them up. Whatever the reason, you must excuse the foolishness of those who will attempt to tell you what Twin Peaks means. They don’t get it. No one does, of course. But the rest of us are okay with that.