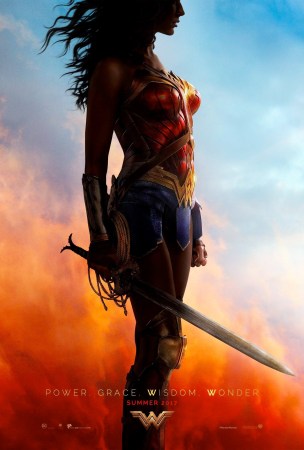 If you know me, you know that I start just about every post pertaining to the DC Extended Universe (DCEU), on a relatively melancholy note. It’s no surprise that I’ve been frustrated by DC and Warner Bros.’ efforts to effectively establish a cinematic universe with the most colorful set of properties at their disposal… and yet every film has the same muted color tone. DC movies, on paper, sound great: Man of Steel (2013) is about Superman’s two fathers influencing him with two different ideals; Batman v Superman: Dawn of Justice (2016) approaches superheroes and the chaos that can naturally follow them, and how the world is affected by that in their wake; Suicide Squad (2016) deconstructs the superhero genre and instead chooses to focus on the bad guys doing a little good for once; but all three of these movies have one thing in common: their execution is terrible. With Warner Bros. hurdling full speed ahead towards their Justice League (2017) movie, they needed a win, and they needed one badly, to ensure that audiences and nerds would still be on board for the next superhero team up to go toe-to-toe with the still successful Marvel Cinematic Universe. Long story short, they got it. Wonder Woman (2017) has been a huge hit, both critically and financially, since its release two days ago; but is the film really deserving of its 96% rating on Rotten Tomatoes – a site that fans, for whatever reason, so desperately crave the approval of when it comes to their precious superheroes? The short answer is no.

Wonder Woman stars Gal Gadot as the Amazonian warrior, Diana, reprising her roll from her cameo in BvS, only this time we get her origin story and it dates all the way back to World War I. Diana was molded from clay by her mother, Hippolyta (Connie Nielsen) and brought to life by Zeus. Diana wants nothing more than to train with the other Amazon women of Themyscira and become a warrior like them. Eventually her mother agrees to let Diana’s aunt, Antiope (Robin Wright), train her in order for her to become the greatest warrior Themyscira has ever seen. When Col. Steve Trevor (Chris Pine) crash lands his plane near the hidden island, Diana learns of a “great war” going on in man’s world and she feels compelled to go there and fight due to her belief that Ares, the God of War, is manipulating men to commit acts of evil. Trevor, on the other hand, is more interested in bringing down a whack job German general named Ludendorff (Danny Huston). Diana heads to London with Trevor and they soon become aware of and grow accustomed to each other’s different lifestyles.

Wonder Woman‘s saving grace is its heart. Director Patty Jenkins does a standup job getting heartfelt performances out of her cast and the movie, for the most part, is wonderful to look at. Themyscira is more colorful than any other DC movie and watching women train one another with such intensity and passion is enough to make anyone happy that this movie is happening. A Wonder Woman movie, directed by a woman, is a wonderful thing. It’s a big step for women, the superhero genre, and both Jenkins’ and Gadot’s careers. Wonder Woman should absolutely be a celebration, there’s no denying that. I think it’s foolish, however, for the world to think that this movie is the best superhero movie since The Dark Knight (2008). I think just about anytime a superhero movie comes out, if it’s really good (or people just tell themselves that), they immediately compare it to TDK. I can’t review this movie and say it was perfect because it wasn’t. Not by a long shot.

Wonder Woman plays out like an origin film, and it sets itself apart from others by establishing Diana’s good nature from the very beginning. Diana doesn’t need her uncle to get shot in order to decide she should use her powers for a greater good. She isn’t cast out of Themyscira for her arrogance, she chooses to leave. Diana’s belief that a mythical God is behind mankind’s evildoing, and that all men are naturally good, is rather heartwarming… albeit naive. It makes for great chemistry between Diana and the more down-to-Earth Steve Trevor, who spends the whole movie trying to tell Diana that Gods don’t make bad men, their ideals do. Both of these characters want to save the world, but their viewpoints make for a terrific juxtaposition behind their relationship that Gadot and Pine carry beautifully. These two are definitely the heart of the story. Still, it doesn’t make up for the flaws this movie comes with.

While it’s certainly more of an action movie than a love story, I was far more engrossed by the character interactions on screen than the heavy slow motion action sequences. To me, if you have a slow-motion-heavy action scene, that just tells me you don’t know how to film action scenes. You can have exhilarating action at a quick pace and not have to slow down to show your character in mid-air, slow motion, almost contemplating where to kick their opponent next. The one exception in this movie that I’ll make is the first real introduction to Wonder Woman as she takes on German infantry by crossing No Man’s Land. It’s her first big set piece in her first live action feature length film. It should rightfully be a monumental moment and it was without a doubt the best action scene in the movie.

I sat in the theater thinking to myself, “Zack Snyder didn’t direct this movie… but it certainly feels like he had a hand in making it.” Sure enough when the credits rolled, there’s Snyder’s name as an executive producer… and a producer… and a story credit. When Diana and Steve head to London, the look of the movie takes a turn. If you’ve seen any Snyder film, you’re probably familiar with his dreary, muted, tones that are supposed to convey a sense of dystopia. For a WWI setting, it makes sense. It’s just a shame that I’m sick of this tone due to seeing it in all the wrong movies the past five years.

There are moments where the film cannot find its footing. The score is too overwhelming, playing loudly over scenes that don’t need this grand chorus banging audiences over their heads telling them how to feel. One scene in particular, with Diana and Steve having a great one-on-one en route to London, was funny; but with the music over-zealously playing in the background, it completely cut the awkward and funny tension that could have not only made a great scene but been one of the most heartwarming moments in all of the DCEU. The third act is a jumble and the “twist” that leads into the big climactic battle (man, does DC/Warner Bros. LOVE their climactic/destructive fight scenes) didn’t feel deserved at all, and went far too long. Once again, we’re given a villain that seems to have little to no motivation. But at the end of the day, I’d rather have a great hero and a mediocre villain rather than a mediocre hero and a decent villain because if the hero is garbage, then why am I watching this movie in the first place?

Wonder Woman doesn’t necessarily push the genre forward in terms of its actual content. But the heart that went into it certainly questions superheroes and their ideals. Diana is naive for her beliefs, but this doesn’t make her wrong for wanting to save mankind’s world. If you’re looking at it from a numbers standpoint, Wonder Woman is a success. The DCEU lives to fight another day (as if this movie’s fate would cancel Justice League‘s release) and Wonder Woman got her due after 75 years of comic book history. The movie could have been twenty minutes shorter and it stumbles to the finish line, barely crossing, but if this movie’s success can bring more women directors into the superhero genre and more heroines on screen, then I’d say the movie did its job.