Skip to content
Gotta' Get Back In Time, Retrospectives

Gotta’ Get Back in Time: Oliver & Company and the Movie as Memory

The first time I felt the inexplicable power of cinema was with Oliver & Company.

From the slow-seeded fear of film’s latent potential to replicate and replace reality comes sensational lingo such as ‘the uncanny valley’ and ‘surrealism’ and cetera. However unfounded and paranoid these concerns might (or might not) be, they stem from a fundamental quality of the cinema, one that has been as difficult to articulate as it has been impossible to ignore.

We see these inexplicably familiar images often in film. Yet attempting to qualify them oftentimes feels like describing color. We cannot explain their means, but we understand their ends. Cinema is the chicken-and-the-egg of recall. Certain films possess the ability to resonate so strongly – in a way that only a moving picture can – that the viewer, down the road, will be wholly unable to remember if the film created the memory or just inspired it.

These instances bind us so strongly to the fabric of the moving image that we forget to whom we owe the emotions it inspires. Oftentimes these moments arise just as much from context as they do from the content of the film itself. Think only of the first movie you watched after your first break-up (Eternal Sunshine of the Spotless Mind in my darkened basement like a fucking moron) – the film itself contains the very memory of that agony, that sadness, that heartbreak, that it would purport to dredge up from within you. Film and past become so indistinguishable that they might as well be the same – might as well have always been the same. Think again of the movie you watched after your dog died. Or perhaps think of a movie you watched three years after your dog died, but featured the song that played on the radio as you drove away from the vet… image and life are inexorably linked, bound by the uncanny power of the cinema to emblazon life, in all its beauties and inequities, on the screen. 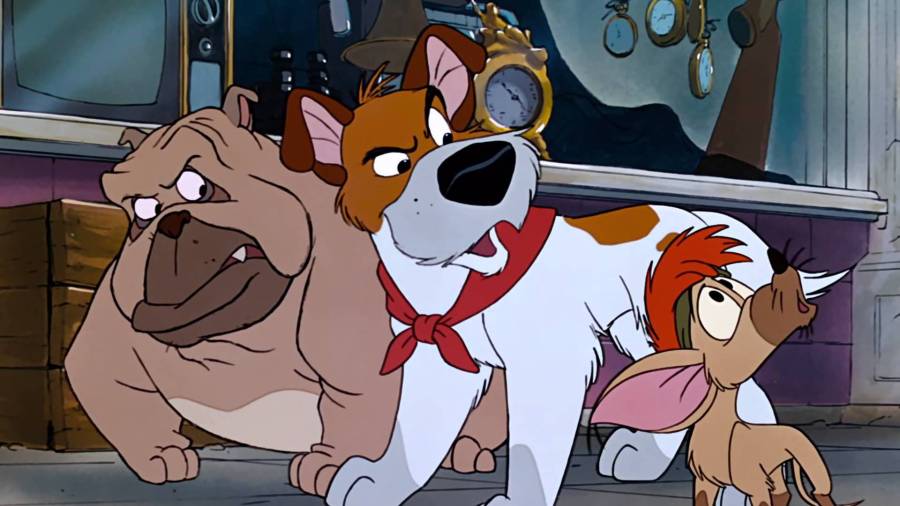 I can pinpoint the first time I was affected by this power – the first time a film ever resonated with me in such a potent way as to conflate my memory with the image that prompted me to remember it. I cannot claim this is true for everyone, regardless of whether or not they’ve experienced this same recognition, but I know that this moment conceived my love for cinema. Like all seeds it was planted small, and only now after such long growth can I even look down to behold the plot of land in which it was sown. 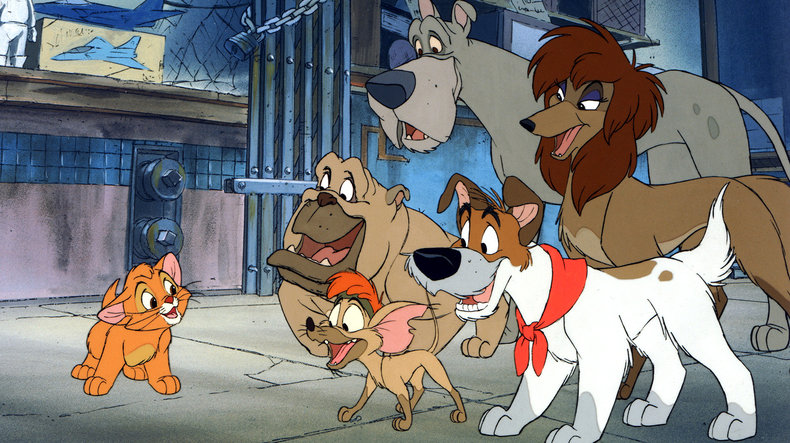 Specifically, it was this shot in Oliver & Company:

Fairly innocuous, I’ll admit. Nothing too earth-shattering about a shot of a young girl and her newly-rescued kitten traipsing through Central Park singing a whimsical piano ballad written by the man who would go on to direct The Lion King. Yet this shot has been woven so tightly in the back of my subconscious that sometimes it’s hard to separate it from ‘real’ memories of my youth. I could be walking next to Father Demo Square cir. Sep. 2016 and catch the half-morphed scent of flowers and sewage and all of a sudden there it is. That shot. Floating athwart my eyes with all the persistence and bravado of a street-saxophonist. A street-saxophonist bellowing out a hearty rendition of “Why Should I Worry?” – …the rhythm of the city / once you get it down / I said you can own this town / you can wear the crown… 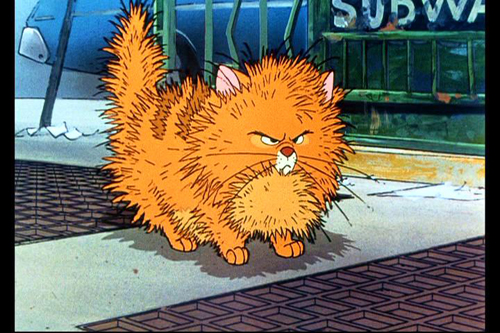 Putting aside that the aforementioned song was the height of Billy Joel’s career (and he didn’t even write it!!) and that anyone who thinks different has spent too much time listening to Jersey Rock, Oliver & Company was about as unmemorable as any Disney film has ever been. It was released almost a decade into the mythical Tesla/Edison-esque feud between Don Bluth and Disney in the 1980s, and by that point in the saga Bluth had already gone all David on Disney’s Goliath with the Spielberg co-production An American Tail (1986). Disney had been feeling the pressure. Some of their best animators (Bluth-ites) had defected to work for the charismatic and considerably darker Bluth, and Disney’s The Black Cauldron and The Great Mouse Detective were both critical flops. They desperately needed a win. The legend goes that someone had shouted out in a pitch-meeting, “Imagine Oliver Twist but with dogs!” and Oliver and Dodger, soon to be retitled Oliver & Company, was born.

The problem is, like a folk artist taking the stage at Gerde’s in 1961, Disney had no idea Bluth’s Bob Dylan game-changer was about to crash into them like a meteor. The Land Before Time hit theaters the same summer as Oliver & Company, and the rest is history.

Oliver & Company is a fairly unimaginative but cutesy reimagining of the Dickensian tale, transposed to 1980s New York City and sure enough starring a pack of dogs, their deadbeat caretaker Fagin, terrifying loan shark Sykes, sympathetic rich-girl Jenny, and of course the cutest interpretation of a Dickens character ever animated – Oliver, a little orange kitten. I will argue the movie is far better than critics at the time decreed, but I will also freely admit that anything coming out that year was inevitably going to be trounced by the absolute masterpiece that is The Land Before Time.

The film is uncharacteristically dark for Disney. Perhaps the studio was trying to compete with the ‘melancholy of Don Bluth’ by replacing the usual ho-hum idealism with a more grounded urbania. The style is grittier – the animation is far more shadowed and grainy than Disney’s usual fare, again invoking the Don Bluth-inspired trend of giving more priority to shadows. The events on screen are comparably violent – the villain is dispatched in an absolutely brutal way and the climax features two dobermans being electrocuted on a subway’s third rail. Unlike most Disney fare, the film is set in ‘real’ New York, so perhaps this more visceral approach is meant to complement the scores of real-world brands and products featured on screen, as if to lend credence to the fact that this adaptation was indeed relocating Dickens’ novel to “our” world. It would also do to remember that the source material isn’t exactly cheerful.

So why this shot? Why this movie? Sure, I was a toddler with a well-instilled love for cats growing up in New York City, so on paper it makes perfect sense. And honestly, perhaps that’s all there is to it.

But there are so many shots in Oliver & Company that could evoke memories of my childhood in Queens. The gluttonous opulence of Park Avenue high-rises. The floral splendor of Central Park in summer. The stinking din of taxi traffic in midtown. The thrilling motorbike chase over the Brooklyn Bridge at the end of the film that breathes in those irreplicable views of the skyline. Every shot calls to mind a landmark, or at least the idea of a landmark. The film rewards anyone who grew up in New York City by capturing the disparate essence of the city’s various neighborhoods, from seedy Meatpacking wharfs to well-lit Downtown causeways. The best part of knowing how the City works is recognizing that it’s one place and a thousand places all at once – a fifteen minute walk is a safari through cultures and cuisines from the world over. Oliver & Company, astonishingly, captured that je ne sais quois about New York City diversity. Yet I picked that particular shot. Maybe not consciously, maybe not at all – maybe that shot picked me – but nonetheless, the shot of young Jenny dragging a stick musically over the wrought iron fence, little Oliver hopping like a bunny at her heels, is part of me. It’s more a part of me than vacations I’ve taken, than songs I’ve performed, than stories I’ve written, even. It’s as fundamental a part of me as my first kiss, my first love, the first time I ever saw a dinosaur skeleton in the Museum of Natural History and thought about how old everything is.

I remember doing the same as Jenny, swinging my twig down the soot black metal of Central Park’s gates, just next to the intersection of 5th and 59th. The late ‘90s taxi cabs were honking their horns and the hot-dog guys were serving up crap by the spoonful and I walked along the edge of the city’s oldest greenery, rapping my own little stick on the fence-posts while my parents watched.

What came first, the memory or the movie?

Was it me in that park? Or was it the stuttering image of a little girl, hand-drawn, driven along by the locomotion of an animator’s pen while a little kitten lapped up the ink at her heels? Was it both of us?

I don’t know why this is the shot that stuck. I don’t know why I can still walk down these streets, almost two decades later, and think of Oliver & Company. I don’t understand how a medium – the chemical reaction between light and silver halide – could make me think of boyhood, of how the city looks in the morning, of the smell of fresh-baked brownies on the 7 train, of the taste of soft-serve, of the cool bending of trees along Juniper Park, of the low drumming tracks thundering below, or the feel of a little plush orange tabby in one hand while the other slips softly between delicate fingers that look just like mine only larger – and full of more stories. 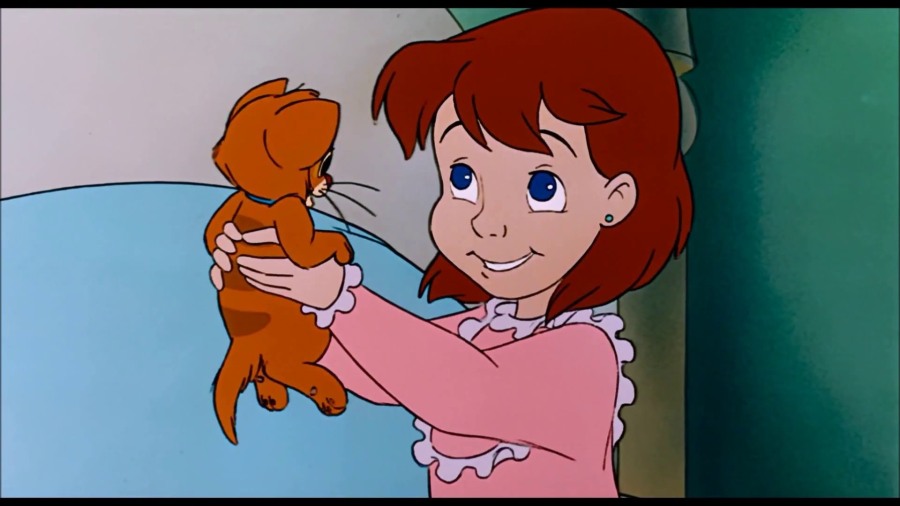 One thought on “Gotta’ Get Back in Time: Oliver & Company and the Movie as Memory”