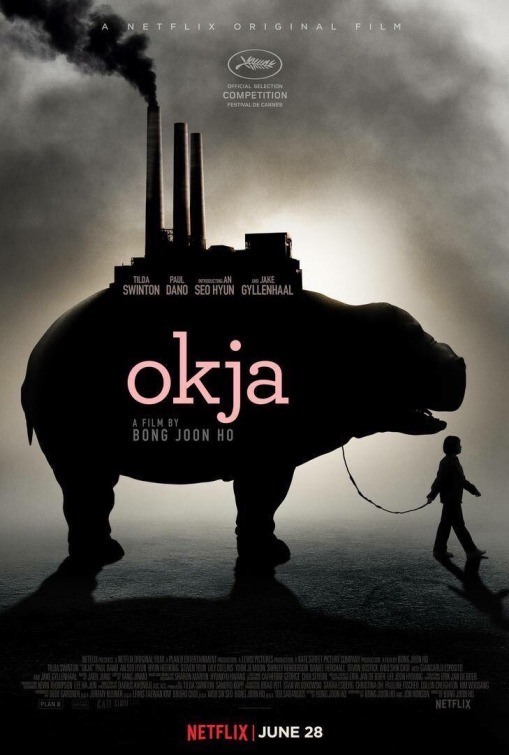 Netflix seems to have a very “throw-shit-at-the-wall-and-see-what-sticks” approach when it comes to their original content. While I’m sure plenty of their original shows are fine, the all-powerful word of mouth is what usually tends to make or break most new ideas. People don’t talk about Real Rob or Iron Fist the same way they do Stranger Things or Orange Is The New Black, and Netflix turns out so much content it’s just gotten easy to dig through the mediocrity for the gems. You could almost say the same thing for their original films. It’s been almost two years since Netflix made a splash with their brutal and dramatic Beasts Of No Nation (2015), and there sure as hell isn’t anyone sticking up for the crap Adam Sandler is being paid to make for them, even if people are still bothering to watch it. Now, according to word-of-mouth, we are finally getting “treated” again to another honest multi-national filmic effort in Okja (2017).

Okja is about the E.T.-esqe friendship between a young Korean farm girl named Mija (Ahn Seo-hyun) and Okja, a member of a newly discovered pig-like species referred to as “superpigs”. Much like E.T. (1982), Mija goes on an adventure to save Okja after it gets taken away from her and her grandfather’s mountainside farm by the New York City-based Mirando Corporation. As revealed in a press release in the opening scene by Lucy Mirando (Tilda Swinton), the cheery, pink-wearing CEO, Okja is part of a promotional image-boosting campaign by the company to take 26 of the best looking superpigs (that they’ve genetically grown and duplicated on the hush hush) and send them each to different farms all over the world, with whichever one ending up as the biggest and the best looking after ten years being declared the winner.

I am finding it very hard to put my thoughts about Okja into more developed words and phrases outside of “it was okay.” My rating comes from my exuberant praise for what worked well in the film colliding with and contradicting my aggravation towards what didn’t work and neither is able to give way to the other. It’s such a lop-sided film in a lot of ways, and in some instances you can see why certain decisions and creative choices were made. Bong Joon-ho, one of the best and most intriguing filmmakers out there today, has masterfully handled multiple genres and very heavy adult themes over his career, such as the satirical monster movie The Host (2006), the anti-capitalist post-apocalyptic action thriller Snowpiercer (2013), and the rape-centered crime drama Memories Of Murder (2003). To write and direct a movie that is essentially a kid’s film is certainly new ground for the filmmaker. I didn’t make the connection that this was the same person during the opening credits, so it’s not like I had any expectations while watching the film. However, realizing this after the fact helped explain a good deal about why I was so confused.

The film’s story is very Spielbergian, but it focuses on big real-world themes that one would normally find in a Joon-ho movie. Joon-ho’s films have never been thematically complex by any means, but they are very heavy ideas made simple enough to understand. He supports these straightforward theses using the mechanics of his films: complex stories and characters, strong and emotional performances, and brilliant visuals. By making the writing much simpler it’s as if he’s inflicting a creative restraint on himself and it only serves to harm the film.

Okja at its core is a critique of the Monsanto-esqe GMO corporate food industry through the lens of animal treatment. The superpigs are treated cruelly in a manner reminiscent of Holocaust imagery (uh, okay then) and Mija’s simple struggle of getting Okja back from a corporation using it for a marketing campaign shows the dehumanizing effects big business can have. This anti-big business critique is very present throughout the film, showing Lucy Mirando’s struggle to maintain a likeable corporate image that is just a big cover up in order to put her company back in the good graces of the public. She’s also trying to keep control of the company away from her emotionally colder but more honest sister Nancy (“I make deals” is something she says at the film’s climax) and fighting against the Animal Liberation Front, who is actively trying to expose the Corporation’s poor treatment of their animals. This is all fine and good if that’s what you want to go for with your movie, but the story is so underwritten that the critique is very one note and might as well not even be made at all.

We don’t really get to know anything about Mija as a person outside of knowing her parents are dead and that her one goal is to get Okja back. I give that it’s cute and emotional and that’s all your audience is going to care about at the end of the day, but there’s no substance behind it! Mija doesn’t learn anything or go through any arc or change throughout the whole movie. None of the characters do, with the only exception being K (Steven Yeun), who lies to Mija and the A.L.F. so they can put a listening device on Okja and use it to expose the Mirando Corporation’s cruel animal treatment. He reveals that he does it because he thought the A.L.F. was “cool” and wanted to be a part of their mission. He learns not to lie and that’s it, and all we’re left with is the easiest usage of self-reflexion (sometimes the good guys lie too!). We see Mija eating whole fish at the outset, does she stop eating animals all together after what she sees at the slaughterhouse? We don’t know. She just wants Okja back and lets herself get jerked around by the bigger adult players – who are actually moving the plot forward – like the characters in the Harry Potter franchise. Is Lucy Mirando solely motivated by profit and image fixing when doing all of this to a newly discovered animal? She says something in the opening dialogue of the film about world hunger, but doesn’t she know world hunger stems from very poor resource allocation and the fact that companies will just throw out tons of perfectly edible food instead of donating it or doing anything else with it? No? Does Mija just want Okja back so she can live in the mountains with her grandfather and not be challenged by the outside world and not meet new people like her grandfather said she should? Okay.

To the film’s credit, it’s pretty easy to get sucked up in Mija’s quest to rescue Okja, at least in the first half. There’s a good amount of time dedicated to showing how close the two of them are and how smart Okja is, which makes you care about it not getting turned into sausages. Not only this, but Ahn Seo-hyun’s acting is very strong and charismatic. She does a great job carrying the film as the lead and manages to hold her own against all of the older and more experienced actors with ease, and nearly all of the performances are just as good. It goes without saying that Tilda Swinton kills it. Now if you know me you know I have a particular bias against this actor, but I really dislike Jake Gyllenhaal. The guy is a kiss of death for your movie. He somehow manages to overact and underact every single performance, and if you see a credit of him on a poster or trailer you know he’s gonna play a shitty person and that the movie is going to be pretentious or just plain bad. I was into his character – the quirky scientific face of the Mirando Corporation – at first, but his performance got real old really fast and I quickly realized just how one-note his character was going to be.

If I had to say whether I would recommend Okja to the bored Netflix watcher, I would be very hesitant to say “yes.” It’s a very simple and cute story about a human and animal friendship, there are plenty of fun and engaging action sequences and comedic moments to keep you interested enough in what’s going on, and the entire film is very well shot. The first half is really solid but the second half is so all over the place tonally – it’s a very ‘the sum of its parts is greater than the whole film’ I suppose. I just can’t help but find it jarring to see a film go so out of its way to make a point that has been made countless times before and still find the need to oversimplify it and paint it so intensely. Bottom line: this movie has Jake Gyllenhaal in it, and that should be enough of a red flag for one’s expectations.

A very ham-fisted film with a story lacking consequence and drama. The first half is solid enough, but it gradually declines in quality once the film is out of the Korea setting. Very well shot and good acting though.