I Done TOLD You to Shut Up About Twin Peaks

It is naive to assume that cultural context does not have an impact on art.

You’ll recall some sixteen weeks ago I told you all to please shut up about Twin Peaks (The Return, specifically). I’ve endeavored to take my own advice for the entirety of the season’s run, but seeing as the most enigmatic and influential show on television has finally ended, after a quarter of a century, it seems prudent to exercise my right to hypocrisy and once-again open my mouth about Twin Peaks.

I will not be analyzing or recapitulating. You will find no theories, no hypotheses or even any notions of any kind regarding the content of Twin Peaks: The Return. I still strongly recommend you read no further unless you have seen all 18 episodes of this final season, but know my goal is not to further saturate the internet with yet another post-game quarterbacking session concerning David Lynch’s swan song. If you want some ‘graphs dedicated to alternate timelines and ‘Richard & Linda’ vs. ‘Dale & Diane’ and ‘two birds with one stone,’ there are writers far more tempered and insightful than I who can quench your thirst.

As I stated at the outset of this endeavor, we’ve got enough of that sort of thing going on.

Expect some spoilers below, but only as a consequence of my needing to discuss the many ways viewers and fans and critics have all failed to properly qualify Twin Peaks. I attempted to make this point at the start of the summer – I shall now admit, to little avail – but I still feel obligated to attempt it once again.

Twin Peaks has never been beyond criticism, but in their rush to either praise or assail, media journalists have neglected the context in which Twin Peaks has been created. They’ve enraptured themselves with the heady surrealism and pronounced influence of Lynch’s initiative, culminating in ‘prestige TV,’ and as such, those who ponder the mysteries of Twin Peaks have sealed themselves in a vacuum of coverage. This show has been talked to death.

This is a bit of a “I told you so,” because even after the “curtain call”-ed and the credits roll-ed, I still believe, with the madman’s malcontent of a Lynchian obstinate, that the legacy of Twin Peaks has been bespoiled. Not by some errancy of the show itself, nor through some fault of Lynch or Frost or Dern or MacLachlan or any of the others, but by all the pundits and die-hards and nerds who have staked their claim on the cultish prestige of being Peaksian, of being ‘fans,’ of investing time into this cyclical, who-doo?, woo-woo world with all its Eastern philosophy and peripatetic plotlines. Twin Peaks created its own villains. It inspired scores of ‘analysts’ and amateurs to either proclaim wisdom or bask in ignorance, glorifying the unknowability of Lynch’s work while at the same time attempting to pigeonhole it into their own narrow worldviews, or at worst, concluding a treatise on its meaning with some kind of obnoxious fortune-cookie non-sequitur. To quote myself:

In imposing upon the return of Twin Peaks an obligation, whether to appease or not, meet expectations or not, journalists have proliferated those same expectations. They have greeted this milestone in TV history not with open eyes and thrill-starved hearts, but with the cold paucity of rationale and discourse. These are the kids in art school you wished you could break a bottle over.

They were the ones who claimed to love it most. In their awe and their fervor, they committed the one sin their beloved Cooper raged so hard against. They missed the forest for the trees.

Look, what I’m trying to say here is that these faults going unmentioned proves the tarnished legacy of Twin Peaks. What once might have been an inimitable show steeped in surrealism and experimentalism, but watered down enough for digestion by audiences far and wide, has become a deified phenomena more akin to mistakenly beloved presidents and merchandised revolutionaries. Twin Peaks, in other words, has become a commodity. Its value is determined within interconnecting markets by the critics and the fans who contextualize it with their own readings and musings, but it is still a good to be traded and sold by anyone itching to prove their commitment to ‘good’ entertainment. Twin Peaks is a latchkey and a dog-whistle for faux-cinephiles baptized in the splendor of “the unique” and “the groundbreaking.” The excess of coverage about Twin Peaks, which manages to simultaneously say everything and nothing at all, precludes it from much-needed criticism concerning representation, auteur-fetishism, and plodded-pacing. We’ve enshrined Twin Peaks with innumerable articles and fan forums and preconceptions about its quality and its importance, and as such, we’ve prevented ourselves from ever truly understanding what Twin Peaks will mean.

I love this show. It is my favorite TV show, and I only saw the pilot some five-odd years ago. I can’t imagine what these past few months have been like for those who have held the world of Twin Peaks in their hearts since 1990. I lapped up the last two episodes with an ardor beyond anything I’ve ever felt for another show. Twin Peaks is indeed an indisputable touchstone in television history, same as Lynch is an American auteur who has earned mention in the same breath as the likes of Kubrick and Huston. Despite the problems enumerated above – and any story on-screen, no matter the hype, is bound to have issues – Twin Peaks is truly unlike anything else on television. It’s befuddling and enticing and possessed of an uncanny ability to elicit true emotion from viewers (cf: The way the show handles the Log Lady’s (Catherine Coulson) death is beyond touching). It’s a terrifying horror. It’s a gaudy farce. It’s a surreal whodunit. In the case of The Return, it’s a thoughtful and measured consideration of aging, of Death, and of the impossibility of ‘victory’ in the war between good and evil… if such concepts are real at all. These are not notions for the faint of heart or the linear of mind. Lynch should be commended for attempting to infuse the dogma of Western ‘story’ (thanks Aristotle, you dead fuck) with a bit of Eastern cyclicality. His efforts may be misguided and sullen at times, but at least he’s fucking trying. 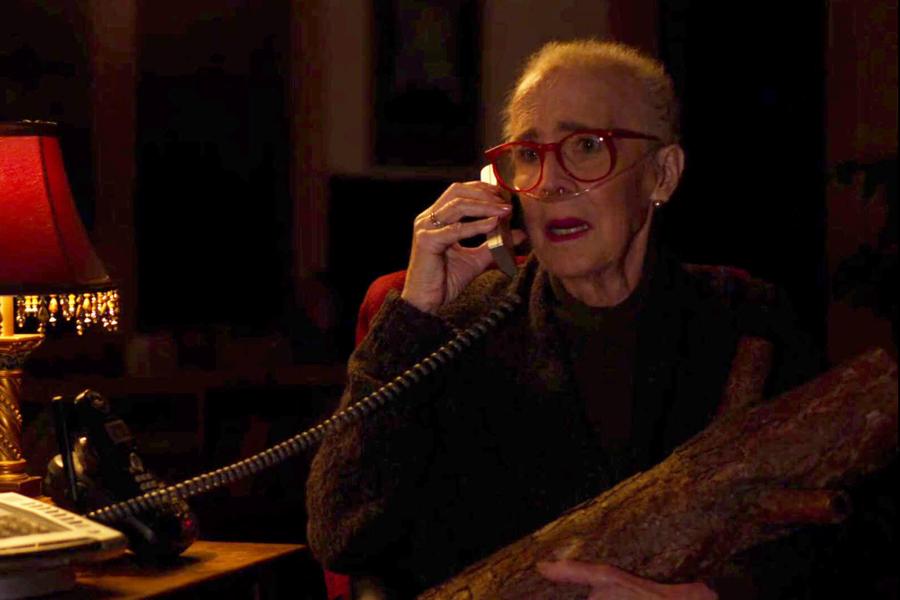 No, I take little issue with the execution of the Twin Peaks phenomenon, other than the grievous sins outlined above. The reception, however, leaves much to be desired. I cannot exempt Lynch from blame for this either – his failings in making Twin Peaks are reflected in his failings in distributing it, with all the coy flirtation of a smug snake oil-salesman hawking his wares. Innumerable interviews, tweets, and testimonies reveal the almost insufferable coolness of Lynch and his cohorts. The meta-coverage of Twin Peaks calls to mind the sports-culture hyperbole surrounding Game of Thrones, or the lowest-common-denominator excitement riled up for any new Marvel show. By calling attention to the methods behind their madness, Lynch and Co. bound their feet tighter to the dais they have been raised upon by their worshipers. Into such a vertically integrated news cycle, in which distributor possesses the cloying right to dictate to which lucky journalist they might impart the next ‘scoop,’ no meaningful critique can emerge.

In my initial piece, I said you should never let anyone try to tell you what Twin Peaks means. To this truth I still hold. However, I must clarify something; you should never let anyone try to tell you what the story of Twin Peaks means, but you must be wary of those who would prevent you from understanding what Twin Peaks, the phenomenon, means for our future entertainment. I fear we will never properly grasp the weight of this show. We have been inundated with coverage to the point of incomprehension, and an oversaturation of the market with Twin Peaks, the saleable commodity, has left us starved for Twin Peaks, the cultural flashpoint. This show was chewed up and spit out by an industry that loved negating its ineffability almost as much as it enjoyed profiting from it. Twin Peaks is over. It staggers out of the public consciousness, battered and bloody from the blows of unconcerned pencils and overly pious fans. It could never enjoy the anonymity afforded to comparable shows such as Legion, Fargo, and even The Sopranos, which did not garner this infuriating sort of scholarly hyper-analysis until long after it concluded. The best thing for Twin Peaks was twenty-five years of obscurity and cult dedication. The worst was the 21st century.

I maintain that no one can ruin Twin Peaks for you. The show has never existed in a vacuum, neither one of critics’ preponderance nor one of Lynch’s untouchable imagination (cf: This final season hinging on the detonation of the first atom bomb, a markedly ‘real world’ event). You are free to ignore all of the blithering nonsense scribbled about Twin Peaks on the internet, if you so choose. But it is naive to assume that cultural context does not have an impact on art. Even if Twin Peaks and its staunchest supporters would like to hope that the show can be enjoyed without the pressures of reviews and recaps and fan-theories, this vain pursuit for tabula rasa – mirroring perhaps Cooper’s own fruitless journey for justice and harmony – does not stand up to the sad truth. We live in a culture of constant connection. Our society encourages regurgitation and pith. It was into the realm of listicles and pop-theses that Twin Peaks returned… and I don’t think it withstood the transition.

Perhaps it is only fitting the finale of Lynch’s (likely) final work takes Dale Cooper back in time, in an attempt to undo the past. Notably, he fails. “What year is it?” he asks, in one last desperate plea for salvation. There is no answer forthcoming – he doesn’t need one. The sad reality is already etched all over the lines in his face, reflected off the clean digital polish of the camera, entombed within the the clickity-clack of the pundit’s keyboard as he types away the awful, unimaginable truth of Lynch’s last hurrah.

Twin Peaks: The Return belonged in the ‘90s. It really was too late.