If you know me, you know I’m not necessarily DREADING Justice League (2017) this November. I just haven’t found a good enough reason to get as hype as I should – for someone who claims to be a huge comic book nerd. While my rewatch of Wonder Woman (2017) certainly improved my initial opinion, DC/Warner Bros. has yet to truly wow me with their DC Extended Universe (DCEU). When JL‘s previous trailer was released, David did not hold back his disdain for what looked to be a CGI cash grab with little to no substance – effectively a middle finger to the fans who have dedicated their lives and looked up to to these (fictitious) icons. With what will assuredly be the final trailer before JL hits theaters, the movie still doesn’t look perfect; but if you ask me, it’s a hell of an improvement.

In the wake of Zach Snyder stepping down as director for personal matters and Joss Whedon replacing him, the film looks a lot different – tonally – than it did when the first trailer arrived over a year ago (wow). It’s far more saturated than Snyder’s dystopian present-day that he has been aiming for since Watchmen (2009); and to be honest it seems a lot more optimistic as well. I’ll admit I was a little drawn back from hearing what I think is the third or fourth cover of David Bowie’s ‘Heroes.’ However, I’ll also admit this song/score mashup was the perfect energy for a movie about heroes aspiring to be as good as Superman. Superman is in the trailer briefly and I knew Warner Bros. wouldn’t ruin the bread and butter of this release, which is when/how will Superman return to the fold after the events of Batman v Superman: Dawn of Justice (2016). It’s just a dream sequence and for trailers that’s fine. People could chalk it up to a spoiler that there’s a dream sequence with Lois and Superman, but if you ask me, that doesn’t give away anything. Honestly, if you’re that paranoid about trailers spoiling anything, the best strategy to have is to just not watch it at all – it’s pretty fool-proof if you ask me.

It still seems out of Batman’s character, to me, to be rallying the rest of the heroes together as the leader; Cyborg and Flash have yet to prove themselves as anything other than side characters with quirky superhero gags like, “he’s the fast guy who’s just like us, awing at Batman and Wonder Woman,” and, “He’s a robot, AND a person, that’s relatable because of the person part!” Aquaman as a bro with a trident is either going to hit or completely miss. Gal Gadot’s Wonder Woman still looks as fantastic as we left her in June, and I think the action here looks very par for the course in the age of superhero films we’re in: disposable army for the heroes to fight while focusing on their dynamic as a team and how they agree/disagree until the final boss fight. Honestly, I’m sick of being disappointed whenever I go into a superhero film and see this trail of bread crumbs, but a Justice League movie is finally happening – that’s awesome. I don’t want to go into this movie expecting a bad movie, because I don’t want characters I love to be mishandled and abused yada yada yada my opinion is the only right one, you get it. It’s a movie, it’s going to be colorful, action packed, and hopefully do the characters justice in the end. I’m on board for Justice League. 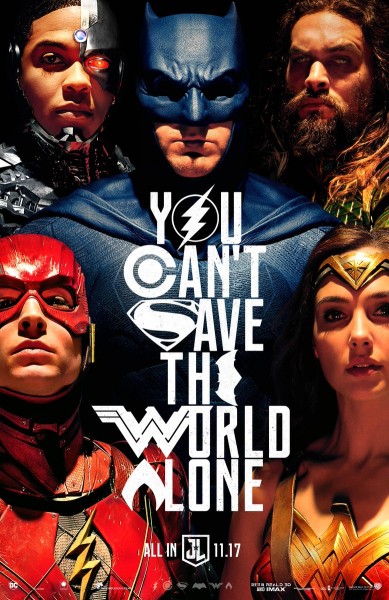