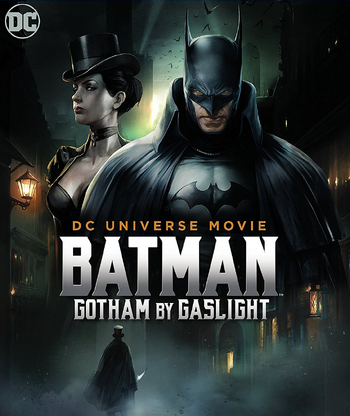 It was only a matter of time until Batman got an adaptation placing him in a Victorian/ Gilded Age setting. The gothic stories of the late 19th century represent the mood and aesthetic of Batman perfectly, and the time period has its fair share of iconic villains; one of which being the infamous Jack The Ripper. Despite being from London, Jack The Ripper finds himself among the usual slew of Batman characters transplanted into Gilded Age Gotham in the alternate timeline story of Batman: Gotham By Gaslight.

The story is decidedly more adult than your run of the mill Batman tale. Like most of the animated Batman films, Gotham By Gaslight feels like an elongated episode of the old TV show and features captain of industry Bruce Wayne (played this time by Bruce Greenwood) trying to stop Jack The Ripper from murdering the women of Gotham. However, every time Batman gets closer to stopping him, the citizens and police become increasingly convinced Batman himself is the culprit, and so Batman must stop the killer before the police get the wrong guy.

While the gimmick of Gotham By Gaslight is rather simplistic, it is also well executed. We see enough of the city and its citizens to know that we are dealing with a different Gotham than what we’re used to, and it’s all told in such a way where it all feels fresh and not predictable or recycled. This is largely due to the more adult tone of the story. The characters you’ve come to know and love from Batman are reimagined in such a way as to where there is no mincing of words about the gender and class relations of the time. The villains are imagined as poorer-class citizens living in the slums; discarded victims of some kind of addiction that they are looked down upon for succumbing to. Some work jobs of ill repute, such as burlesque dancer Poison Ivy, or just wander the streets rambling insane like Harley Quinn. It is only Selina Kyle (Jennifer Carpenter), a respected actor and socialite, who sticks up for the poorer class while working against the misogyny and separation of the genders in the upper class. Harvey Dent (Yuri Lowenthal) stands out as one of the upper class male villains to make it in, and his duplicitous nature is cleverly represented as a drinking problem that reflects the pro-prohibition sentiments of the time.

This noticeably mature characterization is tied into the story in such a way that it turns our usual Batman narrative into a more character and thematically driven one. Batman isn’t as active a detective in this film because of how elusive Jack The Ripper is, especially with regard to keeping his identity a secret. He only ever finds key clues after the few rather exciting fight scenes with The Ripper, and then it’s up to Bruce Wayne to navigate Gotham’s social scene to learn more about who The Ripper could be.  Scenes like this allow us to see the impact The Ripper is having on Gotham, including some blatant but necessary feminist rhetoric from the lower class women about how if they were from the nicer part of town or if they were men, the police would have caught the criminal by now. It helps world-build in a unique way while establishing a contemporary adult tone, even showing some blood here and there and having men throw sexist slurs around to help make sure there’s no confusion in establishing who is good and bad in this world.

If you like the animated Batman films then this one is definitely worth checking out.  You feel like you’re seeing a whole new side of Batman that’s unique for the time period but still manages to offer contemporary insights. The fight scenes match this tone perfectly by showing us more physical contact and blood than what we’re used to, but never too much where it’s gratuitous – although I’m sure it would’ve helped this film stand out even further. Even though this film is its own isolated product, you still feel like you’re getting a “same but different” animated Batman experience, and this is certainly an experience worth having, if only once.

Between the passive investigation and deftly executed fight scenes, Batman: Gotham By Gaslight is exciting enough to keep you engaged throughout. While overall the film feels more like an elongated episode of the old TV show, the mature tone and themes introduced into the perfectly executed setting help this film stand out.