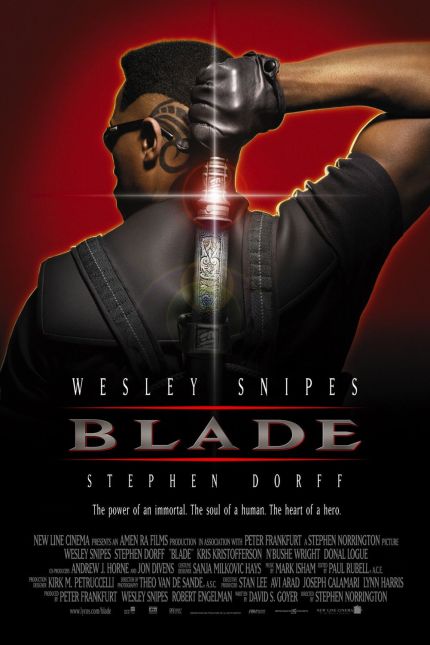 February is Black History Month and this year what is especially exciting about that is the upcoming release of Black Panther (2018) on February 16th. Black Panther is already being heralded as the first black superhero movie of the modern era and while this should absolutely be a celebration of representation in the superhero genre, people have been going so far as to say it is the first black superhero movie EVER. You might be surprised to know that this is hardly the case. There are black superhero films out there; the real crime is how few there are and how many jaded white superhero movies are in-between. Black Panther may be the first Marvel Studios film with a primarily black cast, but people forget The Meteor Man (1993) was the first superhero film in general to have a primarily black cast. The movie didn’t do spectacularly in the box office, but it certainly had good intentions with inspiring messages. You also have the Disney Channel Original Up, Up and Away (2000) – a comedy/adventure about a boy from a family of superheroes who, despite not having any super powers of his own, is called on to save the world. You also can’t forget Steel (1997). Steel is a god-awful movie that Warner Bros. and DC are probably ashamed to associate with the comic book title, but Shaquille O’Neal in a superhero movie is a sight to see, and the only thing good about this film is the soundtrack standout: “Men of Steel”, a posse-cut featuring O’Neal, Ice Cube, B-Real, Peter Gunz and KRS-One. But one superhero film that truly stands out as both a great superhero movie and a great representation of POC in film is the original Blade (1998), starring Wesley Snipes. Blade not only lays the groundwork for the modern superhero template, but it also thrives with honest characters, effective world building, and lets you have a blast for two hours.

Blade Opens in 1967, with the titular character being born after his mother is bitten by a vampire while going into labor. Flash forward to the present day and Blade is a daywalking human/vampire hybrid who hunts and kills vampires – treating them like locusts as they move from city to city. He is assisted by Abraham Whistler (Kris Kristofferson) and a hematologist named Karen Jenson (N’Bushe Wright), and together they scour New York to stop vampires and uncover just how deep their roots go in our world. Believe it or not, there was a time when superheroes were not as ubiquitous across the film landscape as they are today. Comic book fans were lucky to get one, MAYBE two superhero movies every few years or so. In the 90s, superhero films were not successful at the box office: Warner Bros. completely flopped with Joel Schumacher’s Batman movies as well as the final Christopher Reeves Superman movie, and Marvel’s first feature film was Howard the Duck (1986), so their film crusade was dead in the water. Then 1998 rolls around – a relatively in-between-period during which nothing was really inspired by the Tim Burton Batman films and before the Marvel Renaissance of X-Men (2000) and Spider-Man (2002).

Blade establishes itself from the get-go with a blood rave where vampires celebrate and revel as blood rains on them from the ceiling. It’s weird, it’s provocative, even sexy in some instances, and it completely comes to a halt when Blade crashes the party and lets loose with an arsenal of vampire-killing weapons. Silver bullets, garlic spray, UV ray beams, classic vampire-killing techniques you hear in urban legends brought to life in a grounded and gritty manner. The action in this sequence, and the movie throughout, is a pure adrenaline rush. Blade is certainly an “origin story” for the character, but for a hero to be introduced with all of his abilities and arsenal already in place is incredibly innovative for the superhero movie genre. Blade has his origin with his mother in labor, dying from a vampire bite, but the cold open only lasts about a minute and we get all the information we need to understand Blade’s bloody crusade. And boy, is this movie bloody. Blade is a dark and violent character, and introducing him in such fashion is the only direction to go in. This is peak 90s technical filmmaking, second only to The Matrix (1999). Granted, it is not a masterpiece. The CGI is god-awful to say the least. It may not be as INNOVATIVE as Iron Man (2008); or as EXCITING as The Avengers (2012); but if I was not five years old when Blade came out and I saw a trailer for it, I’d go see it immediately and have exactly the kind of fun I would expect. You get a good story, a hero with a tragic background, incredible fight choreography backed by great music from The Prodigy, and you get an incredible villain in Stephen Dorff’s Deacon Frost. Frost is one of the simplest and most love-to-hate villains in any superhero movie I’ve seen. He’s vile, he’s funny, he’s charismatic. As well as Frost, you like everyone in in this movie and understand each character’s motivation with perfect clarity.

The movie does a great job of introducing us to a world in the same vein as Men in Black (1997), where vampires walk freely among humans unbeknownst to them. When the movie isn’t blowing you away with action and lets you breathe for a moment, you’re treated to a plethora of world-building details on this massive vampire-conspiracy: there are slaves with special symbols on the backs of their necks, there’s an ancient religion, and of course vampires are never hesitant when it comes to oozing sexuality. In a matter of two hours, it’s incredible how much of a world is built for the audience. You also learn more and more about Blade, his condition as a “daywalker” and the consequences that come with it. Nothing feels too hit-you-over-the-head, and the movie never feels for an instant that it drags because every scene is vital in forming this singular ensemble of dark, weird fun.

The fact of the matter is, there is a serious lack of representation in superhero films today. Seeing as superhero films are the bread and butter of Hollywood’s studio system today (or as I’ve come to dub it, the “Hollywood Universe System”), this is a serious issue. It has taken Marvel Studios almost a decade to introduce an Avenger-of-color, and even then it seems like the next one won’t be until the eventual Black Panther sequel. Yes, Falcon and War Machine are made into Avengers at the end of Age of Ultron (2015), but even after that they’re still just sidekicks to Captain America and Iron Man and don’t move an inch unless they say. It’s great that Sony is developing a Miles Morales-centered Spider-Man animated movie – but why did it take three iterations of Peter Parker to get to this? Blade is a forgotten relic of the 90s that provides representation in film with a pride and gusto you just simply don’t get in the genre these days. What excites me the most about Black Panther’s upcoming release is if/when it is a box office smash, it will open the door to many more superhero films focusing on heroes of color, and not just making them “the black sidekick” to give a stale movie the illusion of inclusiveness. In the meantime, if you want to broaden your superhero horizons with more films focusing on black culture and representation, I put together a small list that you can check out below. Granted these movies are not guaranteed 5-star accomplishments (you’ll see Steel on the list); but their importance in today’s day and age rings truer than ever.