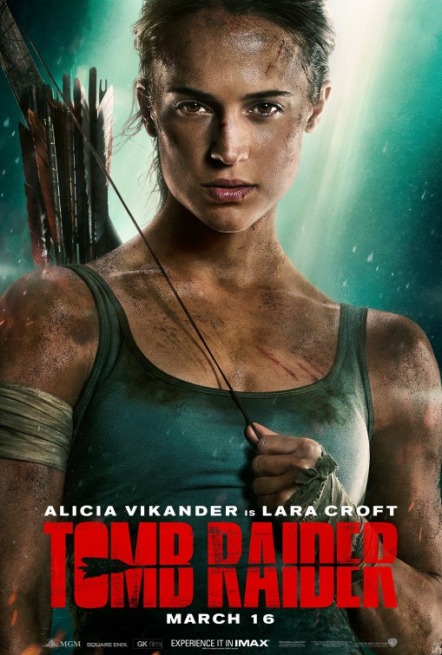 If you know me, you know I enjoy the occasional video game. I don’t do online multiplayer as much as I did in my middle school days of Modern Warfare and Halo 3. Nowadays I mainly play video games for the story – and the occasional Grand Theft Auto to let out some stress from the work week. For as long as I can remember, successful video game film adaptations have been nearly impossible to pull off. Maybe a few of the Resident Evil adaptations are entertaining (there are six of them now?), and there’s a cult fandom for Mortal Kombat (1995), but for the most part (about 99%), films adapted from video games have a bad reputation among fans of movies, video games, or both. Considering Tomb Raider was one of the leading franchises in late-90s/early-2000s video gaming – with a female protagonist leading the charge no less – it came as no surprise that a studio would take advantage and cast Angelina Jolie as Lara Croft in the original, relatively faithful adaptation of the series that grossed over $200 million. The sequel made $100 million less, but that also doesn’t exactly come as a surprise. Now, a decade later, Alicia Vikander takes the Lara Croft mantle and jumps into the action for a video game adaptation/reboot that starts off on the right foot… only to completely drop the ball in the second half of the film and forget that this is still a movie, despite the source material.

Tomb Raider (2018) is certainly a departure from the canon of Playstation 1’s Lara Croft adventures and falls more in line with the PS3 reboot of the series. There’s no denying that the new Tomb Raider games take themselves more seriously than their forebearers, and Alicia Vikander’s casting certainly adds weight to that direction – she looks just like the new Lara Croft mold (skinny/jacked/petite white girl). The movie sets up Lara’s motivations with a background story about her father leaving to investigate some world mystery and essentially going missing and presumed dead. Her father disappeared only seven years ago (the movie takes place in 2018 so the fact that 2011 is considered ‘the past’ makes my stomach churn) and she stumbles upon a recording that halfheartedly explains that Lara’s father is an archeologist who went looking for… something. It’s a decent attempt at giving Lara motivation to drop everything in her life to search for her father, and it is a step in the right direction for video game movies, making it more investigative than action-packed.

Much like a King Kong retelling, Lara finds herself on this abandoned Skull Island-type mass of land where she meets Mathias Vogel (Walton Goggins), who is investigating whatever Lara’s father was investigating. So now we have our antagonist, whose only apparent motivation seems to be that he works for this shadowy company that is “everywhere.” We don’t learn a lot about Trinity, the organization apparently pulling the strings even before Lara’s father’s disappearance, but this conspiratorial slant is certainly the most interesting part of the movie and it is barely addressed. Instead, the second act of the film comes to the slowest of crawls as Lara bums around from sight to sight – either running from Vogel or avoiding some series of obstacles, much like the newest Tomb Raider installment. By the time they make it to the titular tomb, I’m barely invested in Lara because she honestly doesn’t do anything. The only time Lara Croft’s character expels any emotion is after she kills someone for the first time and takes a moment to process it. It’d be a good scene with some gravity to it if she wasn’t picking people off like flies with a bow and arrow two scenes later with no reaction whatsoever. First markings of a serial killer, that’s all I’m saying.

The action is entertaining enough, but compared to the interactive experience of action games like Tomb Raider or Uncharted it simply isn’t as effective of a method of storytelling. Even in games like Uncharted, whenever Nathan Drake is knee-deep in trouble or in a chase, he is either verbally interacting with the environment/those chasing him, or he’s engaging in the scene together with a partner like Sully. Instead, in Tomb Raider, Vikander is grunting and screaming her way through every action sequence. She’s not even allowed to be a character and interact with the world around her. It’s just choppy editing and CGI to give off an illusion of any real danger the character might be in. The rusty plane scene that is recycled in all the trailers is fun, if I hadn’t played that chapter three times over in Uncharted 2. Lara even suffers a stab wound to the gut EXACTLY where Nathan Drake gets shot. Action scenes aren’t the only time I felt this movie ripped off the Uncharted games, or even the concept of game-playing in general. There is a scene in the movie where the protagonists are trying to figure out a puzzle before the room they’re in kills them (very archaeologist/adventure-genre stuff). In the scene, Lara treats the trap like a twelve-year-old playing a video game; not paying any attention to detail or directions, she button-mashes every possible solution until one finally works, and the scene fails to build any tension in the process.

By the time the characters get to the tomb that has been built up for the duration of the movie, the payoff is miniscule at best. We only have the word of two characters as to why this tomb is hidden and its secrets so dangerous. We don’t have any concrete evidence confirming these secrets to be true or not, and the only reason we’re in this tomb is because Lara’s father did a bunch of research on it. He does not even say if he has any hard evidence that they should be where they are. I simply didn’t buy the fact that this power or entity they were searching for is real… or even that the characters should believe it’s real, based on how little they’ve heard about it. The movie also tries to play off the climax like Indiana Jones and the Last Crusade (1989), which should honestly come as no surprise. This movie could not figure out whether to rip off its source material; Uncharted; Indiana Jones; or even the Angelina Jolie Tomb Raider that came before. I get that films can be inspired by a multitude of other works, but that doesn’t mean the filmmakers should toss away a salient tone, effectively making this movie go from a semi-cohesive story to just a jumble of ripoffs and obligatory “homages” to video games.

For all intents and purposes, Tomb Raider should have been a no-brainer: a strong female protagonist with the same thirst for adventure as Indiana Jones and based on a still-popular video game franchise. However, director Roar Uthaug takes his movie too seriously and doesn’t allow Lara Croft to have any semblance of fun on her journey. Alicia Vikander does what she can with a character that lacks any real depth, and the remainder of the cast is forgettable. Even Walton Goggins seems to lazily act his way through his shoddy characterization (I literally have no idea why he even has a grudge against the Crofts).

I’m a fan of the Tomb Raider games and even appreciate the immersiveness of the rebooted installments. They’re not amazing examples of storytelling but they understand that at the core of the game is a fun adventure with puzzles, stealth, and shooting bad guys. With Tomb Raider (2018), it is like watching your friend play that game, poorly, and they skip over the action sequences because they prefer the bland and morose story that moves at a snail’s pace just to get to the next action sequence. Unfortunately for Alicia Vikander’s valiant attempt to empower Lara Croft, the movie falls into the void of every other mediocre video game adaptation. Onto the next one (Rampage (2018), starring The Rock, and I am all in for that).