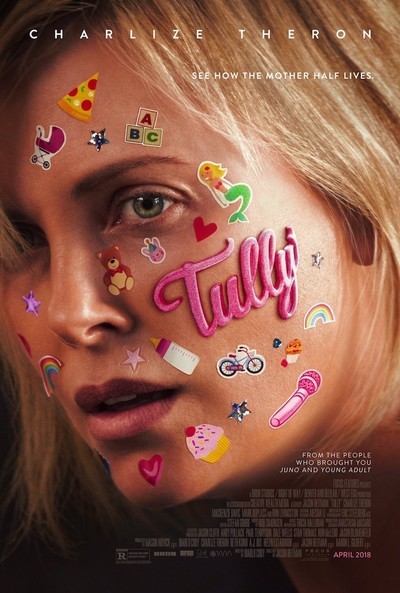 When I went in to see Tully (2018) the other day, I had not yet seen anything by the often highly-regarded Diablo Cody. While she hit strong with Juno (2008) and Young Adult (2011), her misses seem to quickly fizzle out of the critical and public eye, and I can see why after watching this most-recent collaboration with director Jason Reitman. A strong case could probably be made for Tully, but if you ask me whether it’s a hit or a miss I would certainly say it’s a miss – and not the first film I would use to introduce others to her filmography.

Tully stars Charlize Theron as Marlo, an attentive and caring, albeit very overworked, mother of two children with a third on the way. Her daughter (Lia Frankland) is very typical and seems to be fine doing her own thing, but her son (Asher Miles Fallica) acts out frequently by throwing tantrums and requires a lot of attention from adults. She is essentially a lone wolf, as her husband Drew (Ron Livingston giving the same performance he always does) is too busy investing his free time into his vaguely defined job and playing video games to assist in any of the child rearing. On top of all this, her children’s private school has been threatening to expel her son Jonah because his “quirkiness” has become too much to handle for the school staff (re: unwilling to help a special needs child), and they will only allow him to stay if she invests in an aide to help Jonah through school. Needless to say, Marlo is at her wits’ end and on the verge of a breaking point. Her only hope of relief from the stress and monotony of motherhood is a night-nanny named Tully (Mackenzie Davis), not the in-school aide that her wealthy brother Craig (Mark Duplass giving the same performance he always does) offers to pay for.

Tully is very all over the place in several different ways, but it finds stability in its lead actress. If there is still any doubt about Charlize Theron’s talent, then this performance certainly dispels those qualms. She’s talented and charismatic as hell with great range; it’s this talent and range that carry all 95 minutes of this film. The character of Marlo herself is pretty generic, but Theron elevates the role to something worth caring about and sympathizing with. The rest of the characters unfortunately do not carry this distinction. I’ve seen all these actors in similar roles and/or I’ve seen these roles in other movies. Tully is a generic manic pixie dream girl who spews obscure fun facts and is comfortable talking about sex because she is random and quirky like that. Drew, while not an inaccurate portrayal, is still your typical unlikable spouse character. And since the film revolves around Marlo so much, the rest of the side characters, even her children, feel forgotten and relegated to stock roles in the script.

This is what ends up being the biggest fault in the film, more so than the characters: its lack of focus. From the very start of the film I could not figure out what exactly this movie was going to be about, plot-wise and theme-wise. At first you think it’s going to be about her taking care of her son as he struggles to adapt to the world, and then you think it’s going to be about her relationship with her inattentive husband. These conflicts and relationships are very interesting and are established in a way that indicates more time will be devoted to them – and you want to see them develop, despite how generic they are – but once Tully enters the film near the halfway point it very much becomes about her friendship with Marlo. This would be fine if it wasn’t for the fact that Tully is an obnoxious person – this all ultimately relates back to the motifs of motherhood and womanhood as it pertains to being a mother to a lesser degree – but the film’s third act throws all of this into question for no good reason. I thought the film was supposed to be based around the anecdote of “it takes a village to raise a child,” as so much of the film emphasizes how Marlo is on her own and manages self-care by sharing her burden with Tully. However, without giving too much away, there is a wholly unnecessary twist that transforms the film’s moral into something that was never fully established. I guess I’ll give credit where credit is due to Cody and Reitman; they don’t spoon-feed you what you’re supposed to get out of the film and they respect the audience’s maturity and intelligence, and I recognize that I’m not exactly this film’s target audience, but WHY did there need to be a twist in a film so grounded like this? It’s not even a good twist when you consider the potential plot holes it opens up.

There’s plenty to support in a movie like Tully – the female talent in front of and behind the camera and the realistic portrayal of motherhood especially – but it still falls flat in many crucial ways. It’s not exactly portraying a universal experience and the catharsis is not empowering or satisfying. Marlo also says r****d a lot in one scene “to stick up for her son and make a point” and incentives her husband with sex to actually act like a parent. Check this film out if you’re a fan of Charlize Theron or Diablo Cody, but I think you’re better off waiting for Gillian Robespierre to make this same movie better with Jenny Slate.

Tully is a film with generic characters, a story lacking focus, and an unnecessary twist that only results in confusing an already thematically confused story.