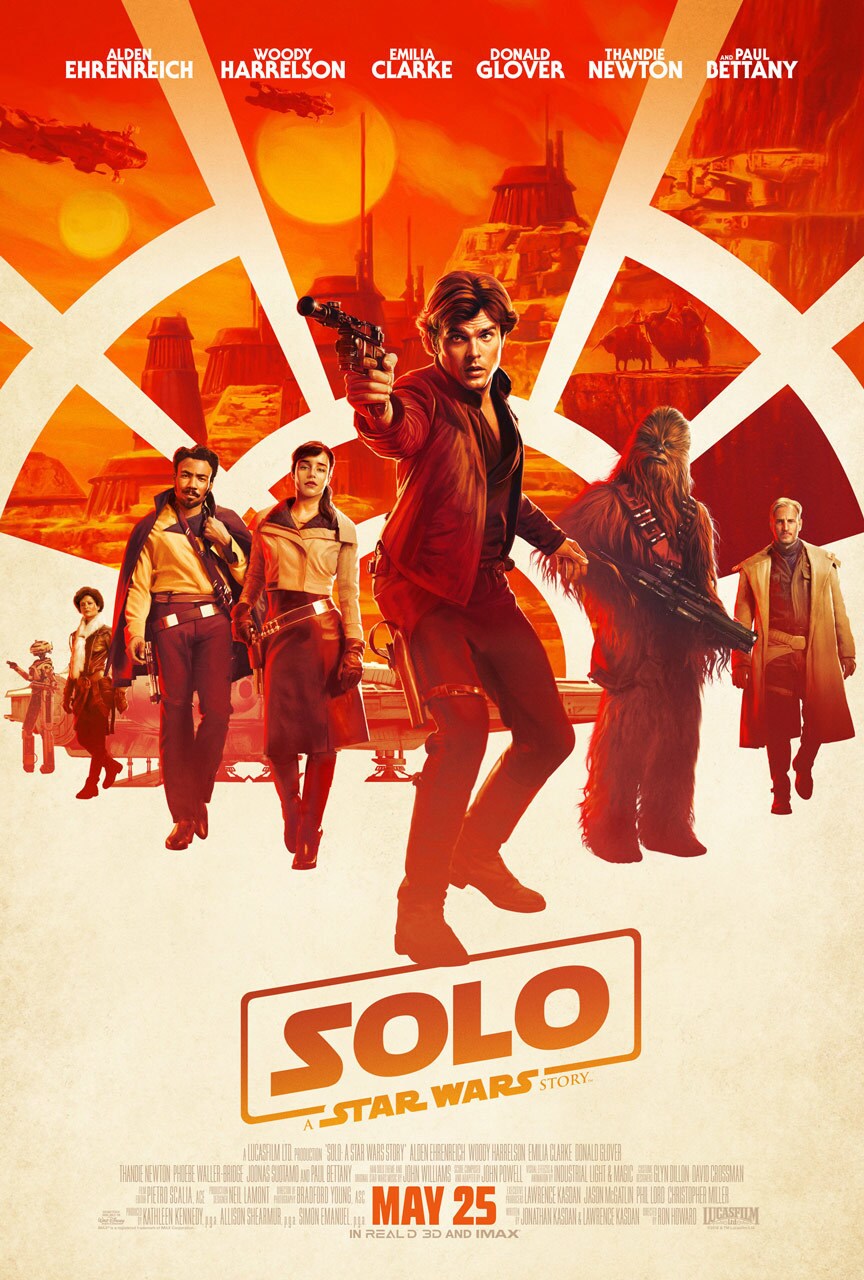 If you know me, you know that my opinion of Rogue One: A Star Wars Story (2016) flip-flops more than Chuck Schumer on literally anything. While I appreciate the grittier action and larger sense of scale that Gareth Edwards brought to the franchise, I generally think the plot-driven story is boring at times and that the characters are not terribly interesting. Regardless, the film made a butt-ton of money, I saw it twice in theaters, and it set a huge precedent for Disney’s spin-off Star Wars films. However, people immediately predicted back when Disney first bought the rights that they were going to go overboard trying to give us too much of a good thing, and this fear was epitomized with the announcement of a spin-off film about a young Han Solo. Perhaps unbeknownst to Disney, this young Solo film already exists under the name A New Hope (1977), and I really don’t think they realized how much the bad press surrounding this film’s production was to going to hurt its release. Rumors of the lead actor requiring an acting coach on set kicked off a string of bad press, culminating in the reports of original directors Phil Lord and Christopher Miller being fired over “creative differences,” only to be replaced by known-quantity Ron Howard, who excels at making classic Hollywood movies but has never been accused of freshness. Well we’re finally here, and the Frankenstein production that is Solo: A Star Wars Story (2018), on a three-day weekend release, has become one of the biggest box-office bombs of all time. It’s definitely as messy as people expected, but despite all of this I honestly still had fun watching it.

The young Han Solo’s story apparently begins about three years before the events that lead him to that cantina on Tatooine. In it, Han (Alden Eirenreich) roughs it on the streets of his home planet of Corellia with his lover Qi’Ra (Emilia Clarke) while working for one of the many crime syndicates that basically control everything on the economically distraught world. Much like every crime movie ever, they dream of escaping their dismal lives and flying off into the sunset, but during an escape attempt Qi’Ra gets captured by their old gang. Han vows to come back for her after he’s made it as a pilot, enlisting with the imperial army. As you would expect, Han’s insubordinate nature gets him tossed in jail (three years after he enlisted) with his future best friend Chewbacca (Joonas Suotamo). The two of them escape with a gang led by Tobias Beckett (Woody Harrelson), who is in the business of stealing H Y P E R F U E L for a crime syndicate called Crimson Dawn. Even when Han finds out that Qi’Ra is working with Crimson Dawn, which is led by a human-alien hybrid called Dryden Vos (Paul Bettany), he continues to work with Beckett in the hopes that he can finally make enough money to acquire his own ship and find the freedom he and Qi’Ra have dreamt about.

I’ve seen a lot of people online complaining about the film’s pacing and it’s a glaring issue that I’m sure resulted from the various re-writes and reshoots. A lot is crammed within the first thirty or so minutes; between establishing the criminal underworld setting, Han’s relationship with Qi’Ra, his cocksure attitude and improvisational skill, and his meetings with Chewbacca and Beckett, it is just too much. I’m sure this sounds like business as usual for the first act set-up of an action-adventure film, but each scene just goes by too quickly to build an adequate foundation, especially when random not-that-plot critical characters keep entering and leaving the story. Things happen because they need to happen to get Han to the Crimson Dawn job, and it makes the stock and cheesy story and dialogue feel all the more played out. The third act, the last 20-30 minutes, suffers from these same issues – it’s just as convoluted with a bunch of unnecessary twists and the worst cameo of all time – to make for an ending that is not as satisfying as it should be.

Now, to be fair, I actually didn’t mind how much this movie follows the typical crime-genre format. Star Wars, after all, grew from the blending of different film genres across different cultures, and you are more or less getting that in Solo with the inclusion of scenes that involve a train heist, jailbreak, forced-labor revolt, and high-stakes gambling. Plus, this is supposed to be a small story within the larger Star Wars universe. However, the dialogue is much too on-the-nose and expositional to make this feel as genuine as it should be and the numerous references and callbacks are stupid, unnecessary, and distract from investing in the world at hand. Han needing to shoot first? Needing to give Chewbacca a shorter nickname? The need to establish where Han got his f***ing last name!? Come on. I’m sure the only reason I had as much fun as I did with this film is because of director Ron Howard. Like Steven Spielberg, the guy embraces nostalgia, cheese, and whimsy in such a genuine and personal way that it’s infectious, even in a corporate product such as this.

The best description I’ve seen so far of Solo is a “fun sandwich,” courtesy of Reed. The meat and cheese of the movie, the middle, is the best part of the film and, despite what comes before and after it, you feel fully satisfied. We’re finally given Lando Calrissian (Donald Glover), along with L3-37 (Phoebe Waller-Bridge) – who I didn’t find too annoying, to round out the heist crew that takes part in some exciting and visually engaging action set-pieces. They knock the Kessel Run out of the park, and the action scenes really allow you to explore some cool new environments and worlds. Now, I’m sure this will be a controversial take, but I was not that into Glover’s performance as Lando. He does fine with what he’s given, much like Aldenreich does, but his performance made me too aware that he essentially does an impression, much like Bill Murray’s take on Hunter S. Thompson in Where The Buffalo Roam (1980). Glover does still manage to shine brighter than the other stars he shares the screen with, and in general the acting across the board is fine, but it’s all just a reminder of how much Harrison Ford and Billy Dee Williams’ charisma can not be matched. Nobody carries a scene or a whole movie like they can.

In general, the middle of the film is as good as it is because it’s the only place in the film where the plot slows down enough for you to take in characters and scenery and everything is kept nice and simple. Oh, we need a ship? Here let’s go find this smuggler who has this fast Millennium Falcon ship. How are we supposed to steal the H Y P E R F U E L undetected? Here, let me f*** off real quick and start a slave revolt as a distraction. It leads to some honestly great character moments packaged within great action sequences. It’s this middle section of the film that made me realize that I had more fun with this gang of characters than I did the group in Rogue One because all of these people (and droid) have way more personality. However, Rogue One is a much more complete film that knows what it is and what it wanted to be from beginning to end. You actually get to spend enough time with all of the characters in Rouge One, so you’re emotionally invested in their fate at the end of the final battle. Solo, meanwhile, is an unevenly paced hodge-podge of different artistic and corporate influences (I despise Kathleen Kennedy’s performative liberal hypocrisy) that is supposed to be character-driven but features a protagonist barely a scant trace of an arc.

Regardless of everything that happened leading up to this film’s release, Solo has a decently fun film at its core. However, surrounding that core is a bunch of obnoxious and unnecessary corporate influence that turned what was already an unnecessary entry in an old, beloved franchise into unnecessary set-up for an unnecessary cinematic universe. We’re all still waiting for that bubble to pop, I just never thought Star Wars would be the needle.

Solo: A Star Wars Story is proof that Disney can churn out a decently fun film despite corporate influence and a messy production, just like Warner Bros. The film starts rough and ends frustratingly, and it will be up to you to decide whether that fun middle, with all of its character acting and epic action sequences, is worth the watch.

One thought on “A So-So Solo: A Star Wars Story (2018) Supremely Squanders Stacks of Skrilla”