Skyscraper (2018) pays homage to ‘Die Hard’ but forgets the point of ‘Die Hard.’ 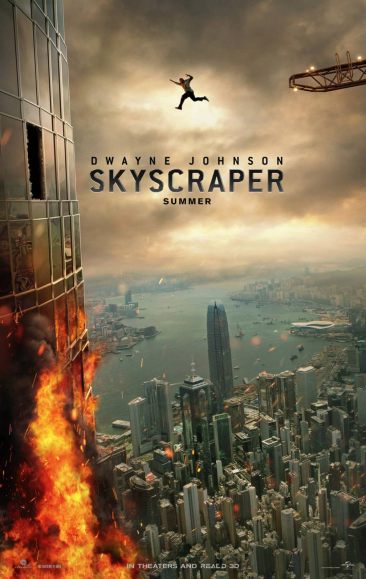 It’s pretty common knowledge at this point that I stan Dwayne ‘The Rock’ Johnson, to the point where I try to see every movie he stars in (and I am waiting idly for Ballers, the best worst show on television, to return). It’s also pretty common knowledge that while movies starring Johnson don’t pack a punch in terms of conveying anything profound, they most certainly pack a literal punch. With Skyscraper (2018), it’s more or less the same Johnson: a family oriented and/or soft-hearted Mr. Nice Guy who is called to action and spews a few cheesy one liners. As a supporting character in the Fast & Furious franchise, Johnson can enrich this Superman-character and become a highlight of the films, but when asked to carry a project on his own the formula quickly goes stale. In this latest installment in his vast filmography, Johnson stars in a hostage-situation tribute to Die Hard (1988) as a knock-off John McClane. The action gets by and the beginning of the film actually elevates it above most Johnson feats, but in an effort to make a successor to Die Hard, director Rawson Marshall Thurber misses a crucial aspect of the acclaimed blockbuster: its destructible protagonist.

After a hostage situation goes south and he loses his leg, veteran Will Sawyer (Johnson) joins a small security company and lands a contract to evaluate the Pearl – a Hong Kong skyscraper run by Zhao Long Ji (Chin Han – who I haven’t seen in a movie since The Dark Knight (2008)). Sawyer’s family resides in the Pearl, so when a group of terrorists led by Kores Botha (Roland Møller) set it ablaze, it’s up to Sawyer to rescue his family and naturally dispatch the terrorists at the same time.

I was surprised the humor of this movie didn’t stick the way I thought a movie directed by the guy who gave us Dodgeball (2004) would, but then again he also gave us Central Intelligence (2016) so maybe I give the man too much credit. One character who does add life to the story is Neve Campbell’s Sarah, Sawyer’s wife. Sarah is resilient in her effort to protect her and Sawyer’s children and does more to guarantee their survival than Sawyer does at times. It makes me wonder why Campbell’s character isn’t the protagonist, but then you consider how much money a movie with The Rock on the poster will make and suddenly you remember Hollywood is horrible.

Skyscraper is standard boilerplate storytelling. From that standpoint, the movie isn’t necessarily BAD. I don’t walk into these types of movies expecting to be… moved. As far as action in a movie starring the Rock, it’s honestly one of the better ones. One fist fight in particular is very well choreographed, with clear motives visible in both characters, but the story as a whole gets more predictable as it goes. Thankfully the movie is less than two hours long and ends before the cracks really start to give. I have no problem with a movie like Skyscraper attempting to pay homage to Die Hard. There’s a reason Die Hard is considered one of, if not the best, action movies of all time and it is because its director, John McTiernan, allows the characters to be irrevocably human. Johnson and Møller both play cookie cutter characters: jacked hero and sinister terrorist, respectively. What makes Die Hard so enjoyable 30 years later, beneath the guns and explosions, is the idea that John McClane is an everyman who has been unexpectedly thrust into the action hero archetype.

The character of Will Sawyer is supposed to be the John McClane everyman stuck in a situation where improvisation and determination are going to save his and others’ lives. Right out of the gate, the issue with Sawyer (and particularly the casting of Dwayne ‘The Rock’ Johnson) is that he isn’t built like an ‘everyman.’ Bruce Willis did little to nothing to physically prepare for the role of John McClane – meanwhile, I mean just look at The Rock and tell me he’s not the Schwarzeneggar of our generation. Every task that Sawyer performs and every CGI set piece doesn’t pose a true challenge for someone built like a tank. They try to give Sawyer a disadvantage with his prosthetic leg, but when Sawyer seamlessly leaps from a crane, crashing through a window of the Pearl, I’m hard-pressed to feel the same way as I feel when John McClane dives through glass only to gruesomely pull shards out of his feet in the following scene. There’s too much self-reliance with Johnson’s character. Yes, he has an altruistic motive: save his family. That’s like if John McClane decided he only wants to save his wife and leave the rest of the hostages to die. Of course, Skyscraper sidesteps this issue by conveniently having the only people in the Pearl be Sawyer’s family, the terrorists, Zhao, and Zhao’s security. What makes McClane such a likeable protagonist is that he isn’t only interested in his wife’s safety, he’s interested in EVERYONE’S safety. Sawyer’s self-reliance can be seen as a positive, but he’s selfish in a way McClane isn’t: Sawyer never thinks to notify police or even attempt to recruit people to his cause. Before McClane takes matters into his own hands, he tries every which way to contact authorities, and even throughout the movie he is in contact with Sgt. Powell (Reginald VelJohnson).

I don’t expect Dwayne ‘The Rock’ Johnson to put his life on the line the way Tom Cruise seemingly does in the latest Mission: Impossible installment, but I can’t deny that stakes feel bland when you know that Johnson isn’t acting around anything; it’s all green screen and CGI. The effects certainly look better than other Rock pictures (*cough* Baywatch (2017)), and I understand this is the reality of the business I’m critiquing, but between Johnson’s physique and the abundance of CGI, it’s hard to feel any degree of obligation to follow Will Sawyer this entire movie.

There is such a thing as generic action movies that are still fun and this movie hits that benchmark, barely. Do not go into Skyscraper (2018) and expect Die Hard (1988). Having this movie compared to Die Hard does it more of a disservice than to just call it a run-of-the-mill action movie. While it’s far from Dwayne ‘The Rock’ Johnson’s finest movies, this certainly feels more like a paycheck for Johnson rather than an attempt to be taken seriously. I still love The Rock, it’s impossible not to. But it seems like I have to keep waiting for the movie that takes him as seriously as he wants to be taken.