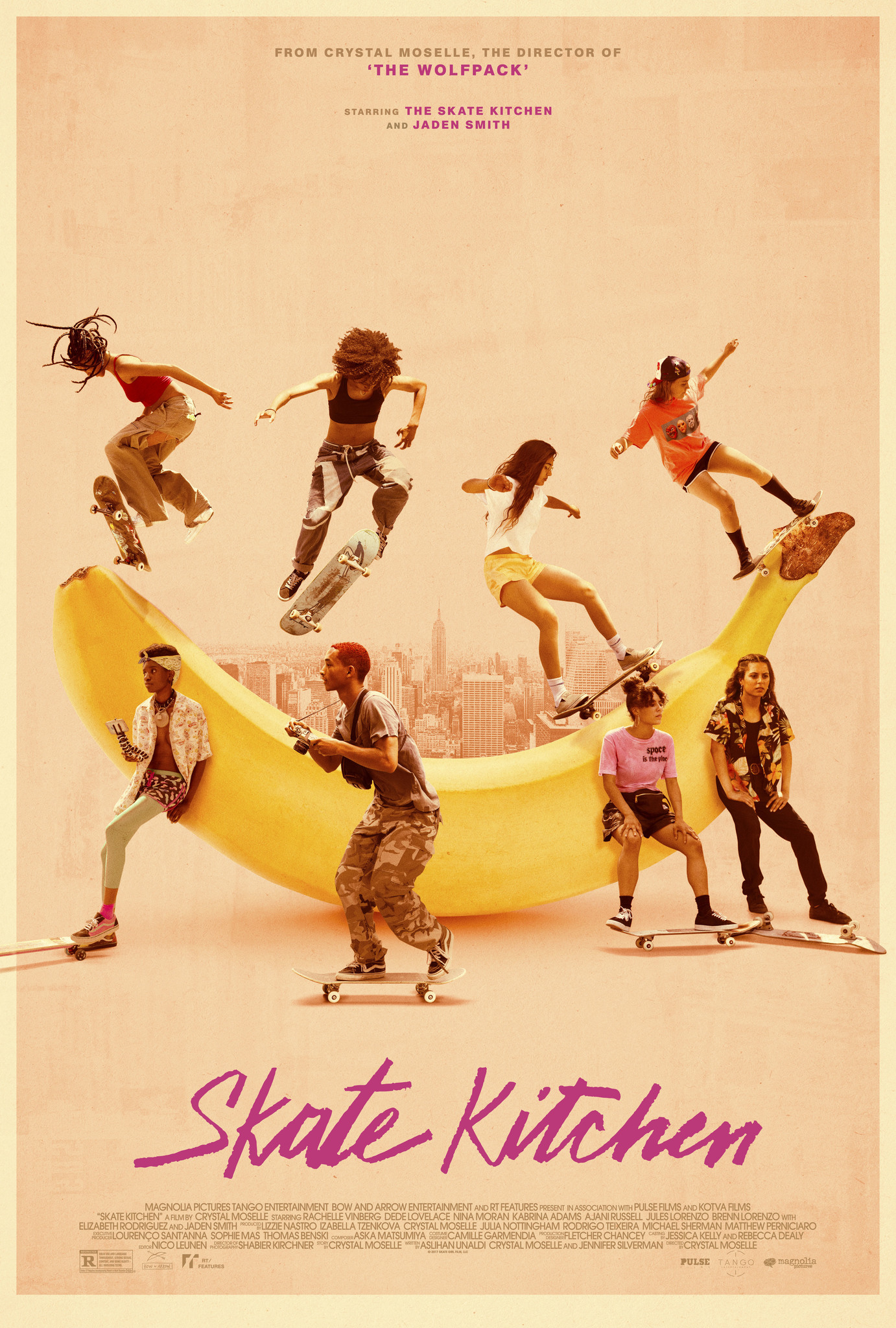 When it comes to the coming-of-age film, it is unfortunately no surprise that male-centric films are treated with more reverence than female-focused ones. Most films of this subgenre are ‘independent,’ which speaks to how all aspects of the film industry – along with patriarchal film culture itself – need to take greater strides toward inclusivity for women creatives and crew members. A recent shaker in both areas is Crystal Moselle, who made a splash with her documentary The Wolfpack (2015) and a fictional short film about young female skateboarders called That One Day (2016). It seems that her short film subject inspired her enough to create a full-length feature about the skateboarding gang in Skate Kitchen (2018), even continuing to use some of the actresses from the short. Even though Skate Kitchen relies heavily on derivative indie filmmaking tropes, perhaps frustratingly so, it is still a well-told story about female friendship and rebellion; and it’s a shame that it won’t generate the same attention as more high-profile works like Eighth Grade (2018) or Lady Bird (2017).

Skate Kitchen follows Rachelle Vinberg as Camille, the daughter of a single Latina mother (Elizabeth Rodriguez) who loves nothing more than skateboarding. It’s her escape from the angst and overbearing parentage that she feels victim to, as well as her passion. A bloody accident (known as “credit carding” to skaters) at the beginning of the film kicks in the mama bear instinct of Camille’s mom and she insists Camille never skate again. However, Camille (secretly) watches Instagram videos of skateboarding and comes across an all-female group of Manhattan-based skaters her age known on the ‘gram as Skate Kitchen. She sneaks off into the city when her mom isn’t around to meet and skate with the gang and ends up forming meaningful friendships out of their mutual love of skateboarding, turning the once quiet and self-contained Camille into a self-confident skater punk.

Now, in this review of a movie by and about women, I must talk about myself briefly. I don’t know if film academia has a term or definition for the kind of filmmaking style that is utilized in Skate Kitchen, but it’s a style that I absolutely hate. It’s practically its own subgenre of indie filmmaking, in which the director attempts a realistic or naturalistic look to their film by employing verite/shaky-cam camerawork, long takes of mostly ad-libbed performances, hard cuts in the middle of a scene that interrupt the action and draw attention to themselves, a bland protagonist that does nothing but look upon the words and actions of drug-using foul-mouthed supporting characters in an attempt at faux-deep observation, and the same stupid music used ALL THE TIME. I understand that some of these choices are sometimes due to budgetary constraints, and I commend the filmmakers for making the most out of what they have, but once you’ve seen one movie done in this style it feels like you’ve seen them all; especially when you realize how slow-paced all of these movies are – and then it feels like you’re trapped in a void of white sadness. Skate Kitchen is truly a film from this school of filmmaking, and at times some of the creative choices implemented are baffling at worst. The most distinct example being a scene wherein Camille talks about her relationships with her parents and the camera op feels like it’s a good idea to focus on her damn chin for ten seconds in the middle of her very heavy and important monologue that also gets interrupted by poorly-used hard cuts. However, and this is really saying something, Skate Kitchen is the best version of this kind of movie, which is thanks in large part to Crystal Moselle’s writing and direction.

Camille’s story is one that works well in tandem with this kind of style. This story is first and foremost a fish out of water story with a meekish Camille, raised by an overbearing parent, entering into the unfamiliar city-based skating scene where the weed flows like water and people talk about and have sex without much restriction. You can tell conversations about sexuality, feminism, and stoner “shower thoughts” are completely outside Camille’s wheelhouse due to her physical placement in the many “we’re hanging out and talking” scenes and how the camera frames her in long shots and close ups to look like she’s almost overwhelmed by the people she’s hanging out with. Vinberg’s amazing and charismatic performance allows Camille to break through these crowds and be a presence, and we completely understand her motivations every time she acts as the passive observer. We know from previous scenes that she doesn’t have anything in the way of close friends and her mom is either busy being single or straight up too busy to be anything but strict and not even teach her about feminine hygiene. Camille is eager to learn about her new friends, the world around her, and herself all while doing kickflips. Even if some of the execution can be cliche at times, this is a true coming-of-age story.

An element of this story seamlessly made just as important as Camille’s journey itself is the female friendships she makes during the film. Yes, it’s true that the camaraderie born of their shared love of skateboarding is what brings them together, but there is honestly not that much skateboarding. It’s showed frequently but in brief instances, and it’s only ever used as a backdrop or a plot device; not obsessively focused upon, like it would in a sports film or a YouTube stunt video. They aren’t savants or cartoonishly good either; they do whatever and it helps sell the film’s realism, but I digress. Camille’s journey is not to become a better skater, but to be like the women of Skate Kitchen. She can skate anywhere she wants, but she puts up with taking the LIRR into Manhattan for the female companionship she never had. She wants to do what she wants away from the protective restrictions of her mother, even if that protectiveness is well-meaning; she wants to truly experience what the world has to offer and learn what it means to be a woman in that world. Camille’s arc in this movie is her transformative coming-of-age into a skateboarding punk, even to the point where she defies her friends through her pursuit of the spineless centrist-peacekeeper between Skate Kitchen and a male group of skaters – the well-cast Jaden Smith. Smith and his male skate crew serve as an important and necessary foil to the kinds of emotionally supportive and vulnerable friendships Camille gains through Skate Kitchen. Neither group reinforces a cartoonish but strict black and white battle of the sexes dichotomy – but it gets close enough so the point is strong and clear.

My lack of mention of any character names is not out of any disrespect or slight. Most of the characters are not named on imdb, and we don’t get to know anybody in the Skate Kitchen crew that well. They certainly all give good performances, and it’s great to see Moselle portray so genuinely NYC diversity in every shot and scene, but this is Camille’s film and the only side character given any b-plot or development is Camille’s mom. There is an attempt at a love triangle that gives us some insight into the differing personalities behind Skate Kitchen and helps inject some drama into an otherwise chill and laid-back film, but this is fleeting and only makes me want more out of their characters and the movie. Perhaps if there had been a meatier script there could’ve been more depth and less reliance on indie tropes to help tell the story, but as is the film is still very solid. It’s certainly worth seeing once, and I can only hope with the right distribution, it finds the wider audience it deserves.

Despite leaning a bit heavily on indie drama tropes, Crystal Moselle’s debut feature is a very solid coming of age movie about a young woman turning into a skateboarding punk. The characters are mostly vague sketches, but this is still a great cast with great chemistry that makes me want to skateboard in the Manhattan summer.