Horror and thriller franchises from many eras of filmmaking are known, sometimes infamously, to have numerous sequels due in large part to the fact that these kinds of films can be made for cheap and almost guarantee return on investment. The Universal monster movies of the 1930s used this model to great success and helped give the independently produced exploitation gorefests of the 1970s and 1980s like The Slumber Party Massacre franchise and the Japanese Lady Snowblood a chance at life. Lady Snowblood might already be familiar to you if you don’t already know it, but you probably would recognize it better as a film that I brought up previously. This is because Lady Snowblood was the kind of movie that a young Quentin Tarantino would rent from the video store he worked at, which would later “inspire” him (read: rip off) to make Kill Bill.

The original Lady Snowblood, which came out in 1973, is also about a katana wielding bad-ass who seeks bloody vengeance on a gang that wronged her and her family in the past. Although the movie is kind of a slow burn, its visuals are striking and Lady Snowblood’s journey of revenge is compelling. Most importantly, the sword fights are tense and are as bloody as one might expect from a film with such an in-your-face title. Since it was made with a low budget, it managed to get a sequel with a more over the top title: Lady Snowblood 2: Love Song of Vengeance released a year later in 1974.

Love Song of Vengeance is not as up to snuff as its predecessor. On the surface, the it’s just another prototypical example of a film that got too big for its britches and only tried to focus on moments rather than a full character arc and a complex, interesting story. Sure, Snowblood is fighting “bigger” foes in the way of the government, but a general redefining of what the stakes are doesn’t exactly make the film feel like it’s a bigger deal. The film opens following our vengeful assassin wandering the countryside some years after the events of the first film. We are teased with an opening action sequence where Snowblood is ambushed by bandits, introducing to newcomers and reintroducing to fans of the original that Lady Snowblood is not someone to cross unless you want to end up dead before finishing your villainous taunt. However, by the end of the credits, we are shown that our cold-blooded anti-heroine has gotten a soft side and tires of killing, even throwing down her trademark katana when surrounded by police. It almost felt like the writers were saying “fuck you” to me when they made that decision. They turned an actively driven and compelling character into a mere plot device and excuse to insert action sequences into the unexciting, mostly dialogue-driven plot.

Love Song of Vengeance then takes us for another loop

and becomes a spy film, where two rival male political factions vie for control and attempt to sway Lady Snowblood to their side so she can be used as a weapon for their cause. I just couldn’t find this film as engaging as the first since the plot is barely about the title character and any attempts to show her genuine impact on the plot are weak and predictable. Kashima Yuki (Snowblood’s real name) ends up siding with the less manipulative and terrible rebels to help them expose the government’s dirty laundry and spark protest and rebellion amongst the common people. They just tried to up the stakes too much and lost what made the first film so great.

Although I stand by these criticisms of the film, I do still think there’s more to take away from this film than what is on the surface. The writing is strongest in its execution and interpretation of its period setting, offering a retrospective on history, even if it’s a simple one, and a commentary on Japanese culture. The film is set in 1906 after the end of the Russo-Japanese War, a short-lived affair from 1904-1905 in which a recently modernized Japan defeated the Russian Empire to establish their dominance in Korea and the northern Chinese region of Manchuria. Although the war put more territory under Japanese control and helped Japan establish a place on the world stage, it lead to widespread inflation and unrest from Japanese citizens, including a brief Japanese socialism movement. Yuki is caught up in these politics, and the rudimentary aspects of her character provide a foil for the political setting.

Kashima Yuki, as we know from the first film, is a character solely motivated by revenge. She feels no remorse for those she sets out to kill because she sees her murders as just and that she’s ridding the world of evil. Love Song of Vengeance has Yuki seemingly give up on violence because of the exhaustion she faces from wandering, but the scene where she throws down her sword comes after she witnesses a parade of soldiers being praised by a flock of commoners. Yuki can no longer be the vigilante she once was; law and order is being accepted as the norm. However, the anarchist that Yuki is sent to spy on brings her to a graveyard full of the unmarked graves of anti-government conspirators to prove his point that this established law and order is not what it seems, and action must be taken against them. After all, it was the secret police that killed the convoy escorting Yuki to the gallows, just so she could be used to quell unrest. A very striking shot of Yuki standing alone amongst the graves is the most telling aspect of her sudden shift in alliances. She identifies with the anarchists and their need for revenge against the government. 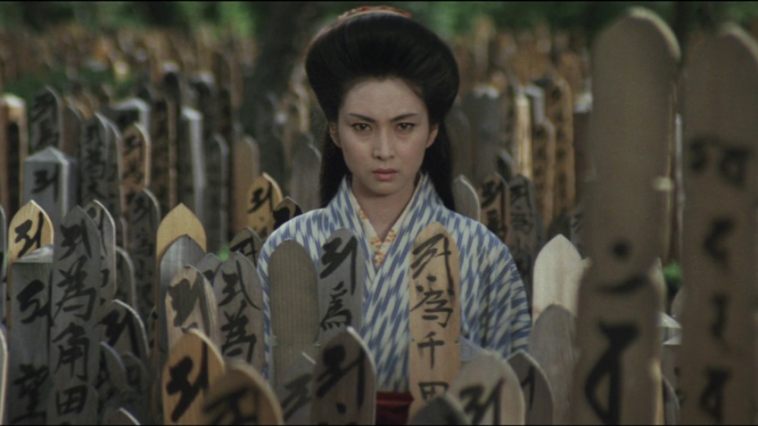 The Meiji government operated with a very pro-military, pro-government control policy, and put less direct control in the hands of the people. The only place in Love Song of Vengeance where the people can assert independence and a little self-governance is in the lawless slums of Tokyo, where even the spies of the secret police are publicly given a hundred lashes just for being caught as outsiders. However, it’s these citizens that the government has contempt for. At the climax of the film, Kikui Seishiro, the head of the secret police, orders the slums to be torched and its denizens burned alive in an attempt to once and for all destroy scandalous documents against the government. Afterwards, the attorney general thanks Seishiro for this act, for he can now “pay [his] respects in peace to the spirits of our war heroes”. 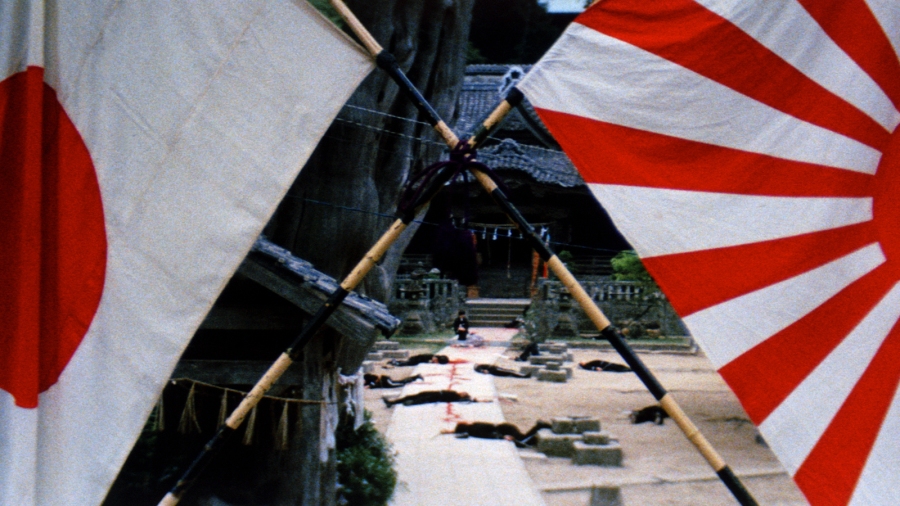 Similarly to the end of the first film, Yuki, our Lady Snowblood, is the last one left standing. She looks over the carnage of the bad guys at her feet while the film’s final shot zooms out to frame her underneath Japan’s rising sun flag crossed with the current flag of Japan. Even though Yuki’s penchant for violence was used as a plot device and an “instant action beat button” during the film, it was established early on that this was not something she wanted to return to. Does Lady Snowblood reflect the duality of Japan? These final moments may reflect the sentiments of Japan at the time and the filmmakers; a need to recognize the overly violent and chaotic past of Japan, but an even stronger desire to move on from the mistakes of the past and move towards a more peaceful and less militaristic society. Even though it was “the only solution is violence” mentality of the first film that made it so dramatically compelling, an attempt at some self-reflection through a historical lens was still a nice sentiment.