We Got It From Here… Thank You 4 Your Service (2016) Review: A Tribe Called Quest’s curtain call. 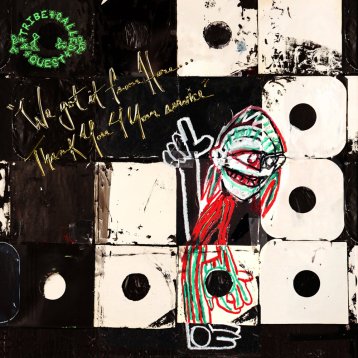 If you know me, you know rap is undoubtedly my favorite genre. In high school, I often found myself on genius.com, following lyrics to Jay-Z and Notorious B.I.G. songs. That took me to N.W.A. and Nas, before I fell in love with Kanye West. A Tribe Called Quest was a rap group that I heard a few songs from but never took the time to listen to, at least not until after I saw them open for Kanye West on the Yeezus Tour three years ago. Fast forward, and they are now easily my favorite progressive rap group. Now, 18 years after their previous album and in the wake of Phife Dawg’s untimely death, Q-Tip and MC Jarobi have come out with one last album.

The two tackle current issues; anywhere from a lack of black representation in the media and racial oppression to the mourning of Phife and the impact he and the group had on rap music over a career that spans decades. Right out of the gate, Tribe’s first track, “The Space Program,” sets the tone for the group’s leftist mentality and push for equality in a white dominated world. Q-Tip is a rapper who only seems to have gotten better with age, as his flow is fast and his words are hard. Rappers like Jay-Z seem to have slowed down in their age to conform to modern rap music, but Q and Jarobi stick to their roots, delivering a vibe that you can’t help but bob your head to.

The album was recorded over the course of the past year, and released just days after the presidential election. It’s almost scary how relevant We Got It From Here is to this controversial, divisive election year. Tracks like “We The People….” cover issues from race and police brutality to inequality for women (You bastards overlooking street art/Better yet, street smarts but you keep us off the charts…) and the album’s final track, “The Donald”, a nickname Phife has gone by in the past, draws contrasts between the deceased rapper and our new commander-in-chief, who may, “Visit’n*ggas in their dreams/And make them scream of bloody murder.” Many artists collaborated on this album, both old and new; André 3000, Kendrick Lamar, Jack White, Kanye West, and an almost-sequel to Elton John’s “Benny and the Jets” features Mr. Elton John himself.

While current issues are on display throughout We Got It From Here, ATCQ couldn’t resist having some fun on this album as well, creating a quasi-family reunion for the group and old time collaborators such as Consequence and Busta Rhymes. Old Native Tongues and fellow Queens-rappers make their way onto the album to pay respects to the late Phife. Phife’s passing is apparent throughout the album, with many songs paying tribute to him, like “Black Spasmodic,” “Lost Somebody,” and “The Donald.” Phife’s verses that were recorded before his death in March at the age of 45 don’t necessarily haunt the album so much as add to the impact of Tribe’s farewell.

While rap music has significantly changed since the days of The Low End Theory (1991) and Beats, Rhymes, & Life (1996), Q-Tip, Jarobi, and the late Phife hold true to their rap form that inspired the likes of West, André, Lamar, and so many more. We Got It From Here is a reflection of Phife, and ATCQ’s career as a whole, that drives home what makes the group tick. Songs like “Kids…” and “Ego” reflect the fantasy that became a reality for ATCQ, and how desperately they tried to examine their egos rather than give in to them.

We Got It From Here… Thank You 4 Your Service is dark and a bit sad at times as the group remembers days of Phife gone by. However, A Tribe Called Quest delivered a final album that feels as relaxed and funky as their glory days. I think it’s safe to say Tribe just re-wrote the book on creating a final album that captures both the past and the present while being wary of what’s to come in the future. It may be overzealous to call the album flawless, but after already listening to it five times, I have yet to find a dull moment on the record. Tribe will always be one of, if not the, greatest rap groups in the genre’s history. My hat goes off to them for this ambitious, classy, and sincere attempt to say goodbye to Phife, fans, and themselves.