The Hamilton Mixtape – An American Pop-Album

JUMP TO CODA IF YOU WISH TO SKIP…

Poor Yeezy. He spent a whole career inflating his own ego with power ballads about himself, only to find they might better be applied to someone else.

I suppose the difference between Kanye West and Lin-Manuel Miranda is when Kanye “needs his theme music,” he has to write and perform it himself. When Miranda needs it, he gets Nas, Common, Ja Rule, Ashanti, Sia, Queen Latifah, Black Thought, The Roots, Jimmy Fallon, Alicia Keys, and Chance The [motherfuckin’] Rapper to sing it for him.

It becomes clear over the course of the record that this album isn’t so much a love letter to Hamilton: An American Musical (itself a “love letter to the first American idols,” as The Atlantic puts so beautifully) as it is a love letter to the Hamilton phenomenon. And like so many American phenomena in the past, there is one distinct auteur piloting the carriage – our latest Orson Welles, 36 year-old Lin-Manuel Miranda.

Miranda’s story is so quintessentially American, so quintessentially New York-ian, the movie rights might as well be propositioned to Scorsese already. An anxiety-ridden Puerto Rican kid from Washington Heights (shout out mi familia) finds solace from high-school bullies in freestyle rapping and theater, goes to Vassar college, ends up writing and producing an off-Broadway play before his thirtieth birthday, and proceeds to follow it up with Hamilton, an unprecedented hip-hop ensemble piece on the founding fathers that has, in the past year, smashed every record on the books and catapulted Miranda into the annals of legend. He was tapped to write the new “Cantina Song” for The Force Awakens (2015), composed the soundtrack for Disney’s Moana (2016), and is now gallivanting around England in preparation for Mary Poppins Returns (2018). All of this success is compounded by an endearing Twitter presence, an affable falsetto, a hyperactive je ne sais quoi, and a really cute dog. Miranda is a boundless hero – admired by theater kid and hip-hop aficionado alike. He’s a champion of diversity and a much-needed exemplification of all the ‘American Dream’ has to offer.

And he made a pop album.

There’s really no point in listening to the Mixtape without first listening to the Hamilton soundtrack; a few songs are demos that were cut from the Broadway production, including one that was featured during its Off-Broadway run, rapped by Miranda playing multiple roles. So this is ostensibly a pop album for the Hamilton fan. And it speaks to the degree of confidence held by Manuel and his collaborators that such an endeavor would not only succeed, but triumph, upon its release. There are, quite simply, enough Hamilton fans out there for this to work.

Most of the “remixed” songs are inferior to the originals. Without the narrative weight of the play behind them, most of the R&B ballads fall a little flat, and the outright hip-hop tracks sound a little too Linkin’ Park-y for my tastes when taken out of context. The Hamilton experiment, much like the American one which it lionizes, works because of the context. An engrossing narrative, the thick veneer of patriotism, the classic tale of brotherly rivalry, the eager juxtaposition of history and modernity; all these factors coalesce to create an ineffable masterpiece in the play. But in The Hamilton Mixtape, we really only catch snippets of these grandiose themes. As with most pop albums, the primary concerns of the Mixtape are those uplifting notions of love, grief overcome, family, brotherhood, and endurance in the face of hardship.

The songs are fueled by rhythmic hooks and catchy choruses, and with the exception of some notable originals, all the remixes are, at best, ‘the sincerest form of flattery.’

The Roots, Nate Ruess, Busta Rhymes, and Joell Ortiz come together for “My Shot,” the unequivocal single off the album. Ruess and Ortiz are serviceable in their roles, and The Roots are in fine form as always, but it’s Busta Rhymes who brings down the house here. He was the inspiration for Miranda’s Hercules Mulligan in the play, and to have him here, lending credence to that homage, is an utter delight.

“Wrote My Way Out” is great, period. Nas is a credit to the rap genre, as usual, Miranda comes in hot and fast with some seriously impressive licks of his own, Aloe Blacc proves why Avicii owes him his career, and Nate East is sick on the bass. There’s little here in the way of remixing – only a sampling of the song “Hurricane” from the play, and the song benefits greatly from the carte blanche offered by this creative choice. This could play anywhere, anytime, off any record, and still be a hit. Yes, it bears the whiffs of Linkin Park rap-rock, fueled by the strings of East, but it’s all forgivable given the thrilling performances by the lyricists on the track.

Usher’s “Wait For It” is perhaps the closest in form to the original, with the liquid-smooth tenor bringing all the fervor and passion to the R&B power ballad that originator Leslie Odom Jr. does in the stage-play.

Watsky is weirdly out of place on “An Open Letter” (another cut-track, though not titled as such), sounding every bit like the white guy on the dance floor that he usually is on ensemble albums. Miranda likely chose him for his machine-gun monophthongs, but they’re more reminiscent of Hamilton’s Daveed Diggs than they are of Miranda himself, whom Watsky is imitating on the track.

“Satisfied” sucks. I love Sia, but this song sucks.

Man, I really wanted to like “Dear Theodosia.” It’s a piano duet by Ben Folds and Regina Spektor. I really wanted to like this song, I did. But given the implicit commitment to POC on this album, and the absolutely staggering performances by some hip-hop and R&B giants in the latter half, a twinkly, airy, mawkish love ballad sung by modern piano-pop’s godparents is just…well…weak.

The internet had a collective emotional break over Kelly Clarkson’s “It’s Quiet Uptown,” so you can imagine it’s about as good as anything that will send tumblr girls scurrying to their ‘brb crying’ gifs.

Alicia Keys brings “That Would Be Enough” the same delicacy and mournful weight Phillipa Soo does in the play. It’s not a particularly memorable song, but in the moment, it’ll rip a heart-string or two.

“Immigrants” deserves a review all unto itself. It’s a triumphant, beat-heavy, brutal, and perfectly political heat-rap about the importance of immigration, built entirely off one line in Hamilton: “Immigrants…we get the job done!” and sounding all too important in the age of Trump. It’s the breakout star of this album without a doubt, featuring all-but-unknown NYC rappers, half of whom only rap in Spanish, which worked for me, but honestly even si no entiendes, lo encantarás.

“You’ll Be Back” is the musical equivalent of Mickey Rooney in Breakfast At Tiffany’s. Who let this happen?

“Helpless” is another prime example of how much Miranda’s musical influences growing up have validated his fandom by lending him a round of applause in the wake of his success. Here we have Ja Rule and Ashanti, calling each-other by name, crooning out a silky club-anthem worthy of a 2002 house-party.

“Congratulations” is technically a cut-for-time-song, but doesn’t feel that way because we have Dessa doing vocals in place of one of the original cast members, and several of the story-specific plot-points are dropped in favor of a slightly more generalized revenge number.

“Burn” is a great jazz-lounge twist on what was otherwise one of the weaker songs in Hamilton. Andra Day showed upon a Rolling Stone list of “10 New Artists You Need to Know” last summer, and it sounds like they were right.

I think “Washingtons On Your Side” is absolutely brilliant and hysterical. It feels like Wiz Khalifa staggered up to the recording studio one day and just asked to be included, and Miranda said, “Sure, we’re breaking for lunch, you have the room.” Totally out-of-the-blue, not in-keeping with any of the other thematic knots binding the rough frame of this ensemble record together, Khalifa takes a song originally about vengeful, bitter rivalries and turns it into a cathartic rap monologue about how jealous everyone gets of all the money he makes. I’m not sure if this was intended to be a funny, postmodern break from the two-dimensional course taken by the album thus far, but even if it wasn’t, it’s still a most-welcome refresher.

John Legend was probably too busy recording his own new album to really put his heart and soul into “History Has Its Eyes On You,” so this isn’t really his best work. Christopher Jackson’s play version is better, despite the gorgeous piano accompaniment by Legend himself.

“Who Tells Your Story” features The Roots, Common, and Ingrid Michaelson(!!!), and it’s perhaps the perfect example of the The Hamilton Mixtape’s Achilles’ Heel; an overabundance of stars, and a distinct lack of substance. The same reason “Immigrants” succeeds explains why “Who Tells Your Story” fails – the former sacrificed star power for lyrics, performance, and theme. The latter sacrifices theme for star power. It’s not a bad song – it’s just not an impactful one.

“Dear Theodosia – Reprise,” featuring Chance The Rapper and Francis & The Lights: THIS IS OUR BOOM-BOOM-BOOM, BOOM. BOOM. MUSIC IS ALL WE GOT, OOOHH. BOOM BOOM.

Much like the man himself, The Hamilton Mixtape is flawed, self-contradictory, incomplete, and overly ambitious. But also just like Alexander Hamilton, and the latent phenomenon surrounding his history, these faults are part of the legend.

Perhaps young Lin-Manuel Miranda saw an avatar in Secretary Hamilton – a scared but scrappy young intellect who had only his wit and his pen beside him, with which to carve out a place in history. And like Newton on the shoulders of giants, Mr. Miranda has done the same. This album is not so much a part of his legacy as it is a testament to it – bespoke by his hand, but guided by the applause of his greatest idols, who turned out in good spirits to pay tribute to the young man who owes them so much.

And if you please, give me leave to make the obligatory, final remark:

Congratulations, Mr. Miranda. You did not throw away your shot. 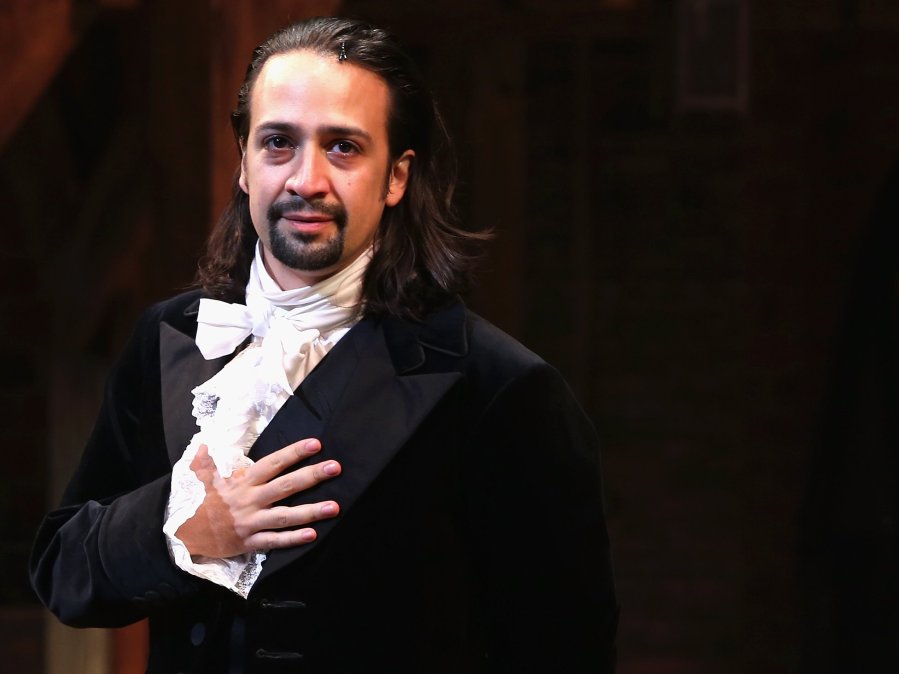