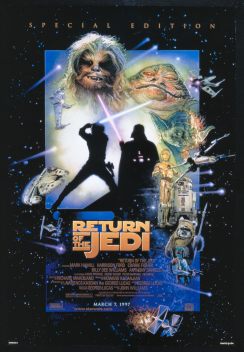 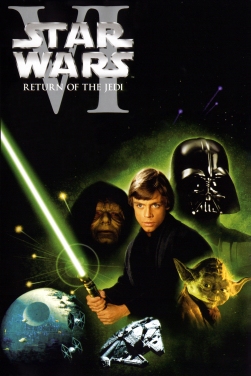 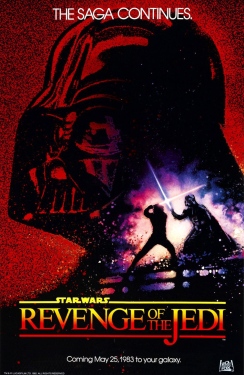 I’m considering the final shot of Return of the Jedi (1983) to be the last time we truly see Luke Skywalker. Yes, he’s in The Force Awakens (2015) for (the best) eight seconds of the movie, but speechless-staring doesn’t flesh out a character that much… however, I can make a strong case for Luke’s facial expression qualifying as better acting than any talent in the entire prequel trilogy. But I digress…

While sequels can be hard, threequels can be even more difficult to pull off. How does one make a movie that not only feels like the third/final act of an overarching story, but also stands relatively on its own and does not over-rely on the path paved by its two predecessors? Very few trilogies have pulled off this feeling of “completeness.” Off the top of my head, the only examples I can name are Back to the Future, Lord of the Rings, Caesar’s Planet of the Apes trilogy, Nolan’s Dark Knight trilogy (by the skin of its teeth if you ask me), and yes I will include the original Star Wars trilogy. ROTJ had massive shoes to fill after the success of The Empire Strikes Back (1980) – a movie, as Ethan put it perfectly in his Empire recap, that can be discussed without even mentioning A New Hope (1977). Cronenberg, Lynch, and Spielberg all passed on directing the threequel and Harrison Ford was feeling franchise fatigue before they even wrapped Empire, so it’s not surprising that Jedi marks the point when Star Wars truly started to become a franchise instead of just a series of films – mainly because of Ewoks. Ewoks aren’t even mentioned by name in the movie because they are barely a plot device; they’re just another thing to sell to kids. If the action figures weren’t enough proof of that, check out the two (TWO) Ewok spin-offs that came out after ROTJ.

Return of the Jedi is not a bad movie, but it’s certainly the weakest of the trilogy. George Lucas got his hands on the wardrobe department and gave us “Slave Leia,” and while one could make a case for Leia’s slave attire perfectly fitting the aesthetic of Jabba’s Palace where she is held captive, to me it’s just a preview of Lucas’s fetishes that further emerge when he wrests more creative control in the prequel trilogy. Boba Fett doesn’t even get a proper death after the world unanimously decided he was a badass. The narrative seriously drags heading into the second act, and it has such problem keeping pace that it often seems like Jedi is just killing time before the climax. Everything on Endor, post-speeder chase, is boring, and it all falls back to the Ewoks. A lot of ROTJ’s story follows the beats of A New Hope: destroying a Death Star, R2 and ‘3PO venturing on foot through Tatooine, Han Solo’s entire outfit in the third act, etc.

In spite of all this, I always find myself giving Star Wars the benefit of the doubt because, to be honest, I’m completely biased. I love Star Wars probably more than life itself. To me, it’s pizza. There are certainly good slices and bad slices, but at the end of the day if I’m eating pizza, I’m happy. Star Wars is pizza. Pizza is power.

Furthermore, while it’s fair to call ROTJ the weakest of the three, that doesn’t mean it lacks redeeming qualities. At its core, this is still a Star Wars film and it feels like the third act to a massive space opera. Every character is the best version of themselves in ROTJ. Luke is a Jedi Knight and even in the face of evil he scoffs, proclaiming proudly he’ll never turn to the Dark Side (he comes close though!). Han breaks and finally tells Leia he loves her, and Leia shows her first signs of becoming an eventual general. Chewie, ‘3PO, and R2 are clutch in the battle of Endor as well as Lando who finds himself piloting the Falcon (and giving Han a run for his money as the best pilot in the galaxy), leading the attack on the second Death Star. And then there’s Wedge Antilles, the most underappreciated hero of the entire trilogy. From the Battle of Yavin, to the Battle of Hoth, to the Battle of Endor, Wedge has been there in his X-Wing ready for any fight. His screen time is limited throughout the trilogy, but you know he belongs there and it’s great to see him as such a key component of the Rebellion’s victory at the end.

For the third act of ROTJ, three events are going on at once: Vader and Luke’s confrontation/Luke’s confrontation with the Emperor, the Battle of Endor on the ground to destroy the second Death Star’s shield generator, and the dogfight in space over the forest moon to take down the second Death Star. This is one of the best examples of cross-editing in Hollywood filmmaking. It works because all of these events hinder on the success of the others – something The Phantom Menace (1999) can’t seem to grasp, wherein four different groups of characters galavant around during the third act. Han and Leia need to destroy the shield generator so Lando and Wedge can reach the main reactor of the second Death Star, and Luke, the main protagonist of the entire saga, he – actually, he transcends plot in my opinion and we can accept that because, well, it’s Luke and he’s always had his own arc that exceeds the main narrative of Star Wars.

Luke and Vader’s confrontation is built up throughout the entire film. After the big reveal at the end of Empire, Yoda confirms that the only way Luke will truly be a Jedi is if he confronts Vader and defeats the Emperor. Yoda’s death is incredibly sad but he tells Luke that when he (Yoda) dies, Luke will be the last of the Jedi… a line that has way too many implications as we count down the days to The Last Jedi (2017). Luke’s journey ends (for this movie) with the light side winning, Vader redeeming himself by throwing the Emperor down a shaft, and his spirit going free as Luke cremates him per Jedi tradition. It’s a humble note to end on for a hero we’ve followed for three movies, but it further proves why Luke is such a great hero. He doesn’t find what he does ‘fun’ anymore. He’s grown up since A New Hope and realizes that he is certainly a part of something much greater. Luke’s position at the end of ROTJ makes me even more curious about what exactly happens throughout the 30 years between this and The Force Awakens, and what Luke takes away from that night on the second Death Star.

While Luke is the focal point for a majority of the climax over Endor, the starfighter battle fronted by Lando is far and away my favorite battle in any Star Wars film. John Williams is on top of his game, composing an exciting and nerve-inducing score to accompany the dogfight and you truly feel the pressure of Lando fighting for his (and the fleet’s) life to buy Han time to get the shield generator down. It’s also the first time we get to see the Falcon truly in combat and the first time we see Lando in a leadership position (where he’s not selling his friends out to the Empire). All of the action in ROTJ is honestly great, except for the battle on the Forest Moon of Endor with all of the Ewoks inexplicably breaking through Stormtroopers’ armor with rocks and bows & arrows. Again, another example of these things only being involved to sell toys and appease kids.

Return of the Jedi is certainly the most flawed chapter of the Original Trilogy. It moves at a snail’s pace in the second act, and Yoda is almost completely disregarded after such an inspiring introduction in Empire. There aren’t any new characters to fall in love with outside of Admiral Ackbar, but would Ackbar be as loved today if it wasn’t for his famous, “It’s a trap!” line? It even fails to expand the Star Wars universe, instead using Tatooine and Dagobah again as set pieces for the first act, followed by a near-carbon copy of the first Death Star and one new planet we don’t even get to go to – we go to its moon. Having said all of this, the action is great when it finally comes, Luke’s journey feels complete by the end, each of the characters truly come into their own, and you can certainly make a case for the visual effects being better than ROTJ’s predecessors since, you know, it was made in 1983 vs. 1980 and 1977. There’s emotion, there’s action, there are stakes that feel real. Return of the Jedi takes all the right notes from the first two installments of the trilogy but gets bogged down at times by a B- script and George Lucas’ self-imposed obligation to kids… it’s almost as if he gained control of the licensing and merchandising rights, hmmm. After watching this, I can confidently say that my excitement for The Last Jedi is at a peak level, and I still have to wait a full week after its release because I promised my father I’d take him to see it just as he always took me to see these movies in theaters. Star Wars brings families together – period. Waiting one more week doesn’t seem so bad, however, when I have this strange feeling I am about to witness my childhood hero die on screen in front of my very eyes.