Marshall (2017) Review: Lawyers Have Never Been This Cool 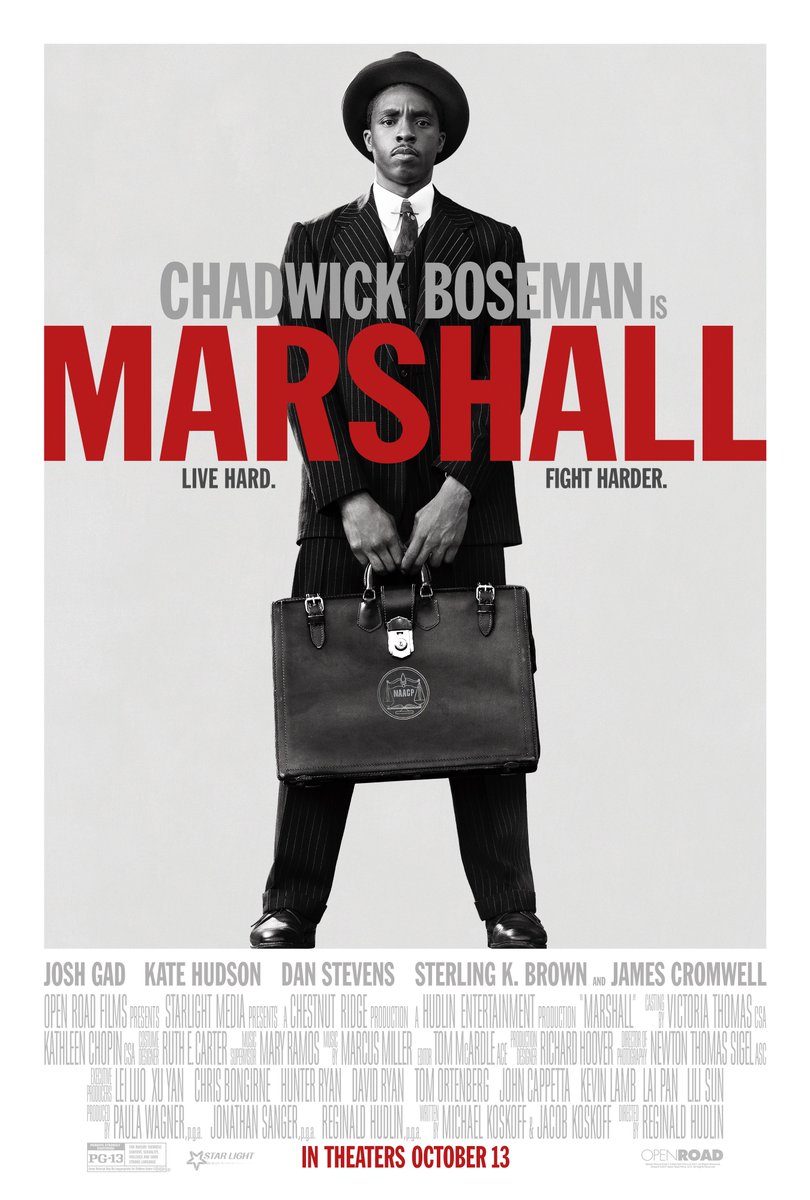 While it is not very uncommon to have two similar movies get released in the same year (The Legend Of Hercules and Hercules (2014) are a notable example of this), I sure didn’t expect two award-consideration movies about real-life black lawyers to be released within a couple of months of each other. The first of these is Reginald Hudlin’s biopic/courtroom drama Marshall. The film is about the well-known NAACP lawyer Thurgood Marshall (the Black Panther himself, Chadwick Boseman) during the middle of his career, travelling from city to city across the U.S. to give legal aid to people of color in need of a fair trial back when segregation was legal. He certainly has a reputation that precedes him, given his influential part in shaping U.S. history, so this film decides to let that reputation speak for itself. Instead of focusing on his bigger landmark achievements, the story is based around a smaller case in the grand scheme of his career.

A black man in Bridgeport, Connecticut is accused of rape by his white female employer and the NAACP sends Marshall to help him. Marshall agrees to help him, insisting that he’s innocent, but can’t defend him until he’s allowed into the local BAR. In comes Sam Friedman, played by Josh Gad of all people, an insurance lawyer who gets forced by his brother/law partner to appeal Marshall’s request to represent Joseph Spell. Although Marshall is given permission, he is not allowed to speak at the trial and must allow Friedman to do all the actual defending in court.

The rest of the film plays out almost exactly as you would expect with a premise like this. It’s essentially Driving Miss Daisy (1989) crossed with In The Heat Of The Night (1967), meets To Kill A Mockingbird (1962). It’s the plot of a courtroom drama driven forward by the characters and themes of a racial drama. Gad’s Feinstein is very resistant to working with Marshall, in no small part because of his racial prejudice and his fear of retribution from his racist community, but also because he has no experience in criminal court. He’s a very meek person who works very easy insurance cases, essentially working for “the man.” By being forced to cooperate with the experienced and charismatic Thurgood, he gains the confidence and knowledge he needs to hold his own in defending Spell while also confronting his own prejudices and those of others.

It’s admittedly jarring that a film supposedly about Thurgood Marshall makes Josh Gad the protagonist. Perhaps just as surprisingly, this is actually the reason why this film works. Marshall is not trying to be another film about white saviorism, or a period film in which a black man overcomes adversity and hardship created by institutional racism. Well… I guess that’s kind of what this film is, but it’s smart about setting itself apart from others like it. Like I said before, Thurgood Marshall has a reputation that precedes him and the film doesn’t bother with any sort of “origin story” or reenactment of his most well-known cases. He’s a lawyer and he’s damn good at what he does, that’s all you need to know. When you’ve got Chadwick Boseman behind the wheel of such an important person, you know he’s gotta be cool as hell and that’s exactly the kind of air Marshall gives off in this film. He has won cases in the U.S. Supreme Court by the time we are introduced to him in the film, and he has stood his ground against judges who were KKK Grand Wizards, so he has no time for the weak garbage he experiences in Bridgeport. I was looking forward to seeing a movie portraying Marshall as a badass and I was not disappointed.

However, this characterization ties back into Gad being the protagonist because Marshall has no room for growth as a character. We already know he’s standing on the highest moral ground he can be on, and he’s already an excellent lawyer. What you can do with the Marshall character examine his influence in a microcosm by showing how he turns a white colleague, albeit one he’s forced to work with, into an ally in the fight for civil rights. He holds Feinstein’s hand for most of the case, telling him what to say and what angles to pursue, while also teaching him how to stand his ground and be confident in the courtroom. His growth as a lawyer translates into his growth as a person, with him fighting harder for the life of a person of color he doesn’t know.

This is really all there is to the film. It still plays out like a courtroom procedural, and there are no attempts to explore Marshall more as a person outside of a few isolated heart-wrenching scenes with his wife, which feel more like an attempt to garner easy sympathy for a character with no other external conflict (this arc is also given an easy wrap-up). The emotion in these relationship scenes is not used to spice up the drama of the courtroom, much how Feinstein’s experiences with anti-semitism are not referenced in the main plot either. Some moments, like verbal vitriol from townspeople and violence at the hands of random thugs in newsie caps (just like every other movie like this), do help Feinstein experience some self-realization with regard to his own prejudice, but other near-pointless inclusions fail to establish an emotional connection and sympathy for the character. Feinstein’s growth is only ever present in the courtroom until the film’s end, and this is pretty much only due to Marshall holding his hand throughout the case and telling him what to say and do, which really lessens the impact of any internal growth caused by experiencing increasingly intense prejudice.

So if you need your Chadwick Boseman fix before you pay money to see Black Panther (2018) and you like law/courtroom dramas, then Marshall might be worth a watch. Obviously Law and Order: SVU has been around for awhile so the use of rape as a focal point for a story isn’t new, but there’s a twist in the story that, considering everything that has been going on in the news in 2017, feels highly inappropriate and uncomfortable even if that was how it actually went down. Otherwise, you’re going to get a standard racially charged law procedural that is tweaked slightly from its predecessors. The acting is good, and it’s nice to see Josh Gad take his role 100% seriously. I don’t know how Denzel’s Roman J. Israel, Esq. will fare, but Marshall is a guaranteed safe choice.

Marshall is a political courtroom drama as good as it needs to be, strongly led by a serious Josh Gad and a calm and cool Chadwick Boseman. Some clever choices made around the characters and how they move the plot forward help give this film an original-feeling edge, but it’s ultimately a song and dance that Hollywood has done before, devoid of any real attempt to make it unique or visually interesting.